WORLD: US health authorities yesterday (Apr 13) recommended pausing the Johnson & Johnson (J&J) COVID shot over blood clot fears, with the company quickly announcing it would delay its European rollout, in a setback for global immunisation campaigns. 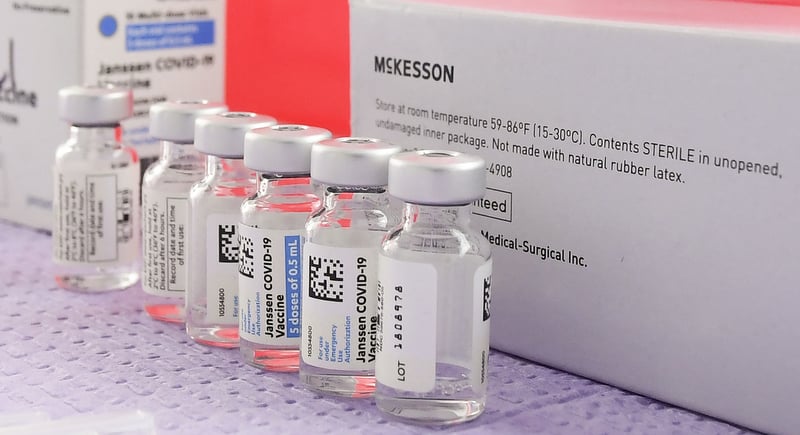 Out of nearly seven million Americans who have so far received the single dose vaccine, six women between age 18 and 48 developed a rare type of clot in the brain along with low platelets, officials said.

One later died while another is in critical condition.

Food and Drug Administration scientist Peter Marks said the disorder might be triggered by a rare immune response to the vaccine similar to that seen among a few hundred recipients of the AstraZeneca jab in Europe.

Both vaccines are based on adenovirus vector technology.

“We have made the decision to proactively delay the rollout of our vaccine in Europe,” J&J said, in a fresh blow for the hard-hit continent which passed the threshold of one million coronavirus deaths.

US authorities are now carrying out an investigation which could end up leading to tough regulatory choices, such as restricting the J&J shot to older people.

People who have received a J&J shot within the past three weeks were asked to report to their doctors if they experienced severe headaches, abdominal pain, leg pain or shortness of breath.

But the White House said it was confident there would be no “significant impact” on the vaccination plan in the world’s hardest-hit country, where almost half of all adults have now received at least one dose.

South Africa followed the United States’ lead and suspended its rollout of the J&J shot, delaying an already sluggish campaign, which has so far only administered this vaccine.

But the European Medicines Agency said it was continuing to carry out its own investigation, and Canada’s Prime Minister Justin Trudeau told reporters his country still expected its first shipment of the shot by the end of the month.

More than 800 million vaccine doses have now been administered globally, according to an AFP tally.

India - which is experiencing a record surge in cases - was given a boost as it authorized Russia’s Sputnik V COVID-19 drug.

The total number of virus deaths is approaching three million, as the World Health Organization warned infections are rising exponentially despite efforts aimed at stopping them.

Muslims around the world started Ramadan after religious leaders confirmed the month of fasting would begin yesterday, with many countries facing virus restrictions.

Mosques in the world’s most populous Muslim-majority nation, Indonesia, will only be able to host people at a maximum of 50% capacity. Worshippers are required to wear masks and bring their own prayer mats.

Saudi Arabia, home to Islam’s holiest shrines, announced that the month of fasting was to start yesterday, though authorities said only people inoculated against COVID-19 will be allowed to perform the year-round umrah pilgrimage from the start of Ramadan.

In the Kazakh capital Nur-Sultan, coronavirus restrictions irked some worshippers.

“This year for example we won’t have the (large) iftars. And we can’t have a lot of people in the mosque. We have to queue and wait,” said 30-year-old Toparkhan Bergenov.

In India health officials have been battling a huge surge in cases in recent weeks that has prompted night curfews and a clampdown on movement and activities.

The country of 1.3 billion people on Monday reported more than 161,000 new cases - the seventh-consecutive day that more than 100,000 infections have been recorded.

In Europe, Germany agreed to controversial changes to a national infections control law, including a night curfew and stricter rules around private gatherings and sports.

France has suspended all flights from Brazil to curb the spread of a new variant found there.

But Britain said it had met its target to offer a first vaccine dose to all over-50s, the clinically vulnerable and health and social workers by April 15.

Maria Van Kerkhove, the WHO’s technical lead on COVID-19, said the world was now at a “critical point” of the pandemic as cases once again grow exponentially.

The organisation also called for a halt to the sale of live wild mammals in food markets to prevent the emergence of new diseases such as coronavirus.