ALL SPORTS: A meeting was held yesterday (Aug 3) by the Phuket Provincial Sports Committee to outline a series of upcoming sports events to be hosted on the island.

AthleticsBadmintonBasketballBoxingCyclingFootballFutsalGolfHandballOlympicsWeighliftingVolleyballSwimmingSurfingSnookerRunningMarathon
By The Phuket News 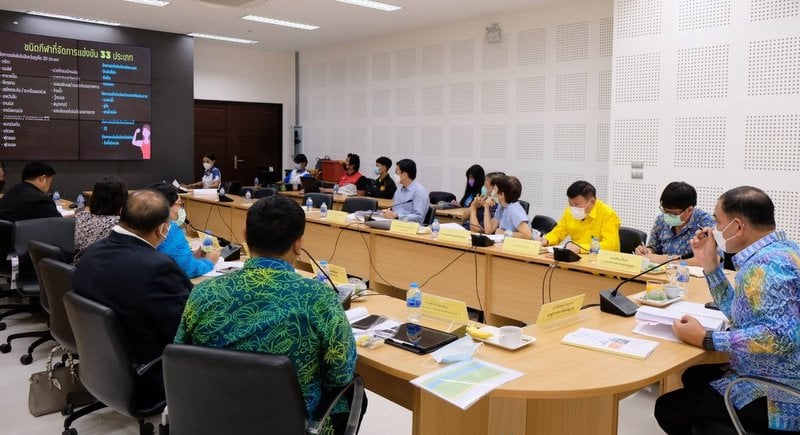 The meeting, held at Provincial Hall, was overseen by Thammawat Wongcharoenyot, President of the Phuket Sports Association. Joining him were Deputy Governor of Phuket Pichet Panapong, Director of the Sports Authority of Thailand (Phuket Province) Damrong Chaisena, Ratchadaphon Oin of the Phuket Tourism and Sports office as well as relevant committee members.

Several sporting events were detailed, including an upcoming surfing competition at Kata Beach which will be part of the “Air Sea Land Southern International Sports Tourism Festival” that will showcase selected events in Phuket, Songkhla, Satun, Phatthalung, Krabi, Phang Nga and Surat Thani, with a supporting budget of B177million.

The “Phuket Beach Festival International Surfing Contest 2022” will be held at Kata Beach between Aug 23-28, attracting around 120 Thai and international professional athletes.

There will also be a fair to coincide with the tournament showcasing surfing clinics, skating lessons, beach yoga and live musical performances.

Category winners in the men’s and women’s longboard and shortboard contests being held this week at Kata Beach will gain free qualification to take part in the international event at the end of the month.

The Committee also explained that there is to be a international karate competition, the “Thailand Karate-do Championship 2022”, on Aug 19-23 at Phuket Rajabhat University Convention Center.

It will be the first time this competition has been held outside of Bangkok and is expected to attract over 400 competitors from 22 different countries, including Olympic athletes.

Further events include the Phuket Sports City 2022 Run at Saphan Hin on Sept 3, the Esther Bunny Women’s Health Run on Sept 10-11 at Laguna, the Basketball Under-23 World Championship at Prince of Songkla University Phuket Campus on Sept 3-17 and a Bodybuilding World Championship in December at Central Phuket.

Further down the line, the Committee confirmed that the Weightlifting World Cup will be held in Phuket between Apr 2-11, 2024 at Phuket Rajabhat University.