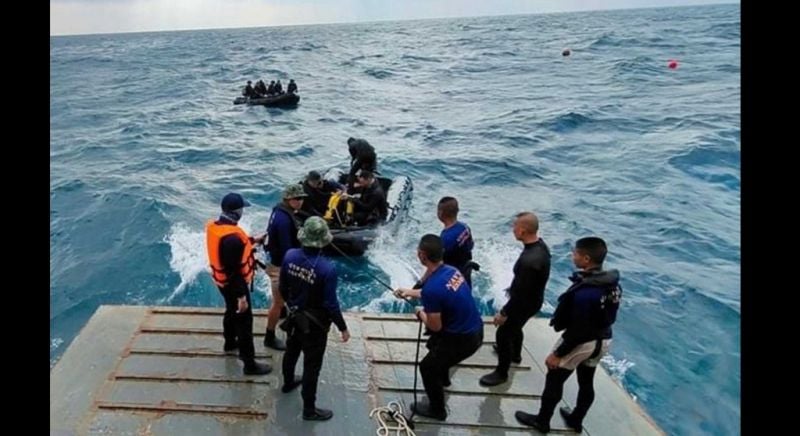 The navy sends 53 divers to search for missing sailors and survey the sunken HTMS Sukhothai, as two more bodies are found and retrieved from the sea. Photo: Supplied/Wassana Nanuam

The first was spotted on Monday by a fishing boat near Chumphon’s Koh Sak and was retrieved by Patrol Craft No 611, reports the Bangkok Post.

The body was confirmed as a member of the missing HTMS Sukhothai’s crew by Vice Admiral Pichai Lorchusakul, commander of the First Naval Area Command. It will be sent for an autopsy.

The second body was found and retrieved by Patrol Craft No 619 at 10:43am yesterday.

There is evidence verifying the person’s status as a navy crew member. The force will reveal the identities of both after the results of the autopsies are released, said Vice Admiral Pichai.

Of the 105 crew aboard the HTMS Sukhothai, 76 were rescued and 21 were found dead as of yesterday, he said.

Eighteen of the latter have been formally identified. Eight crew remain missing.