PHUKET: Turkish Airlines resumed direct flights to Phuket over the weekend, bringing 168 foriegn tourists to Phuket on their first flight from Istanbul since the COVID tourism lockdown began last year. 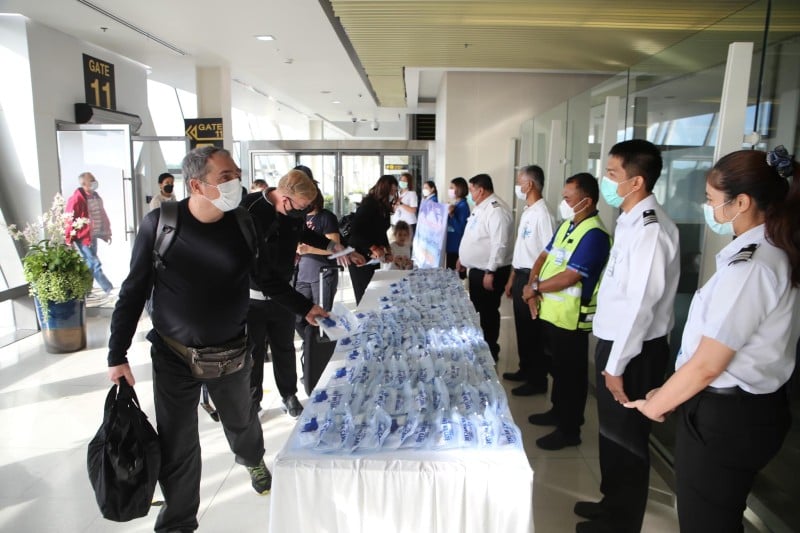 Airport and airline staff were on hand to welcome the arrivals at Gate 11 at the International Terminal.

The flight marked the return of Turkish Airlines direct services to Phuket, starting with two flights a week (Saturday and Wednesday) for the remainder of November, rising to seven flights per week in December.

Turkish Airlines is also now operating nine flights a week direct to Suvarnabhumi International Airport in Bangkok, and will maintain nine flights per week throughout December.

The Turkish Airlines passengers were among 2,034 international arrivals to land in Phuket on Saturday, according to the Phuket Reopening Daily Report Issued by the Tourism Authority of Thailand (TAT).

Of those, 1,452 arrived as Test & Go tourists and 576 arrived under the Sandbox scheme.

The international arrivals on Saturday landed on 15 flights operated by 12 airlines, the TAT report noted.

The trend for international arrivals to fly direct to Phuket continued yesterday, with 1,585 passengers arriving at the airport. Of those, 1,263 were Test & Go arrivals, 297 were Sandbox arrivals and five arrived under the Alternative Quarantine scheme.

In total, 85,749 have entered Thailand under the Test & Go scheme, the TAT report said.

According to the Phuket Immigration Daily report for Nov 21, also issued earlier today, arrivals from Germany remain the most popular international arrivals in Phuket since Nov 1.

During the three weeks, 1,446 Thais had arrived in Phuket from abroad, Phuket Immirgation noted in its report.