PHUKET: Three people escaped without life-threatening injuries after a truck collided with a local bus in front of Chaomae Lakmuang Shrine, on the northbound section of Thepkrasattri Rd, Moo 5, Thepkrasattri, early this morning (Mar 12). The two vehicles involved in the collision, the ‘song taew’ in the foreground and the truck in the distance, as rescue workers and police survey the scene. Photo: Eakkapop Thongtub 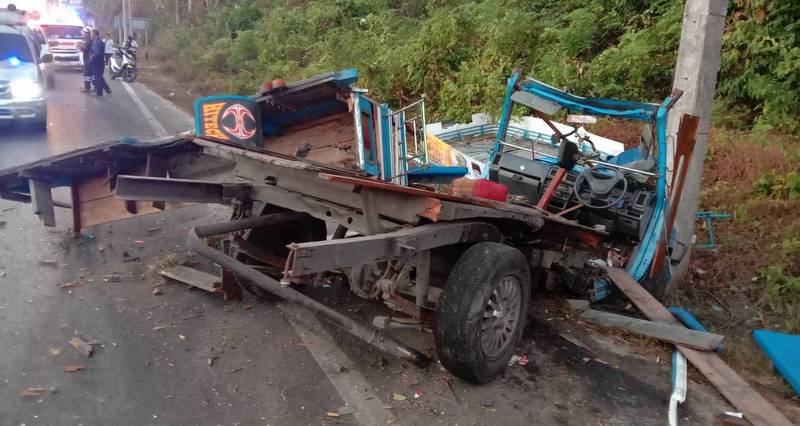 The local bus, otherwise known as a “song taew”, suffered massive damage. Its driver, 71-year-old Mr Phon Wonghiran, sustained scratches and bruises across his chest and to his right leg and was taken to hospital.

The Pathum Thani registered truck had veered off the road following the collision and also sustained damages. Its driver, Kiattipon Phittayanan, 28, and his passenger, On-uma Chanpruek, 38, had suffered injuries to their bodies and were taken to Thalang Hospital.

Lt Pattarakorn Phongphaiboon of the Thalang Police was called to the scene at 5:45am this morning together with Kusoldharm rescue workers and an emergency team from Thalang Hospital.

According to police, Phon stated that he was making a U-turn on the northbound section of the road when the truck, which was driving very quickly, hit the back of the bus resulting in the drivers of both vehicles losing control and crashing.

Lt Pattarakorn told The Phuket News that both vehicles had been taken to Thalang Police Station.

Asked whether police had conducted alcohol tests on either driver Lt Pattarakorn confirmed they had not, stating, “I did not smell any alcohol from them.”

When asked whether any charges would be made, he said, “at this stage, we are still working on the investigation.

“We will question both drivers once they have been released from hospital and decide from there,” he concluded.