PHUKET: A five-hour siege at a home in Krabi ended with police taking into custody a man wanted for shooting dead three teenagers by the side of the road in Krabi’s Khao Phanom District early this morning (Sept 6). 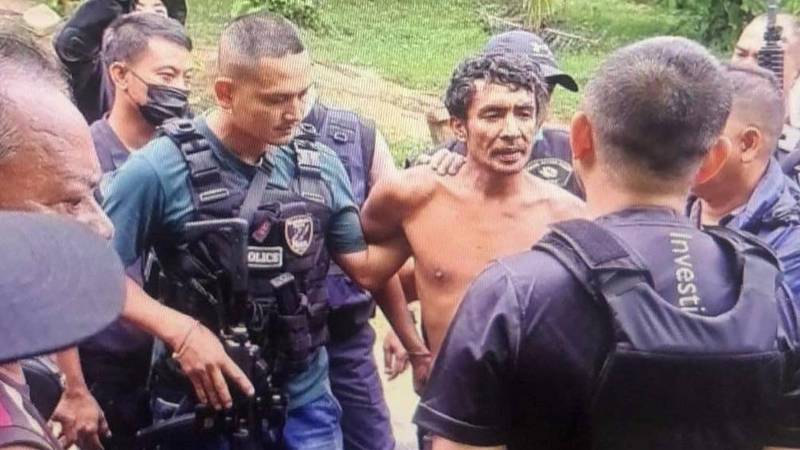 Teerasak Boonruang, 42, was placed under arrest at his home in Tambon Phru Tiao, at about 8am while officers recovered the shotgun and the car used in the killings.

Teerasak confessed to carrying out the killings.

Officers were first informed of the slayings, on the Khao Phanom - Thung Yai Road in Moo 2, Tambon Phru Tiao, at 1:13am.

The bodies of three 18-year-olds, one male and two female, were found at the scene.

The body of “Mr Nonthapat” was found in the grass beside the road. He had been shot in the face.

The bodies of “Ms Phantira” and “Ms Natchanicha” were found lying face-down on the road. Both had been shot in the back.

All three teenagers were senior students at a local high school.

Near the bodies was the scorched remains of a motorbike that had been completely destroyed by fire.

On the road was a piece of front bumper that police believe came from a sedan car.

A shotgun casing was also found at the scene.

According to the preliminary investigation by police, officers believe the three teens were riding the motorbike towards Khao Phanom District when they were struck by a black sedan, now confirmed to have been Mr Teerasak‘s black BMW.

Teerasak said that he did not know the three teenagers he killed.

He said that he only knew that someone had been hired to kill him.

Teerasak said he saw the motorbike drive past him, so he crashed his car into the motorbike, knocking the three to the ground. He then exited the car and shot them, then returned home.

He denied setting fire to the motorbike.

Teersak remains in custody and will be tested for drug use, police said, as he was known in the area to be a drug addict.

Teerasak’s mother, Prasert Bunruang, 69, told police that her son had been taking drugs for a long time. He had received treatment at many hospitals, but never fully recovered and always returned to using drugs, she said.

Ms Peasert added that Teerasak had recently taken to firing his gun into the air for fear of danger.

Ms Prasert expressed her deepest condolences to the families of the three teenagers slain.

At Wat Khao Phanom, where funeral services for victim Natnicha ‘Nong Nam’ Panseng are being held, Natnicha’s father, Suchart Panseng, 41, described the murders as “beyond cruelty”.

“It’s beyond human… I want the authorities to prosecute to the fullest extent,” he said.

Natnicha was in Phuket in August last year to compete in petanque at provincial-level games.

“She was going to Chiang Mai in November to compete in the provincial-level finals,” she added.