BODYBUILDING: Thailand won a total 28 medals as the curtain came down on the 13th World Bodybuilding and Fitness Championship at Central Floresta Phuket on Sunday (Dec 11). 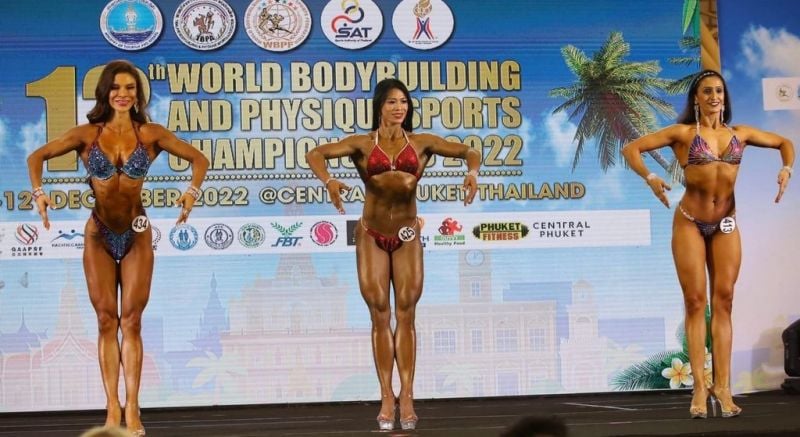 Thai athletes contesting a range of weight and height specific categories won one gold medal, one silver and one bronze on the final day of competition to take their overall total to 10 gold, 13 silver and five bronze.

Chanyapat “Kwang” Korparaphirom won the final gold medal of the competition on Sunday when she retained the senior female world title in the 170cm height limitation category, a title she had also previously won at the last competition in Uzbekistan in October 2021.

Chanyapat said she was delighted to win and retain her title and was already setting a target of achieveing a hat-trick of titles at next year’s competition in South Korea.

Other highlights included Thailand’s Sirinthip Organic, who won gold in this year’s Asean Games in Vietnam, winning a silver medal in the women’s 165cm class, finishing behind Mongolia’s Galzan Kalzaruul and ahead of Muniapin Delatiela of New Caledonia.

In the team competition Thailand’s women finished in first place overall on 375 points, with Mongolia in second on 325 points and Hungary in third on 200 points.

The Thai men’s team won silver with a overall points score of 600, with India claiming gold on 715 points and Malaysia in third place on 180 points.

Dato Paul Sure, President of the World Bodybuilding and Fitness Sports Federation (WBPF), oversaw the official closing ceremony on Sunday where trophies and medals were given to individual and team winners.

The closing ceremony also marked the handover of the official WBPF flag to representatives from South Korea, who will host the 14th edition of the tournament from Oct 31 to Nov 5 next year.