BANGKOK: Thailand has expressed its “deepest sorrow” at the death of Queen Elizabeth II and government offices will fly the national flag at half-mast for three working days as a mark of respect. 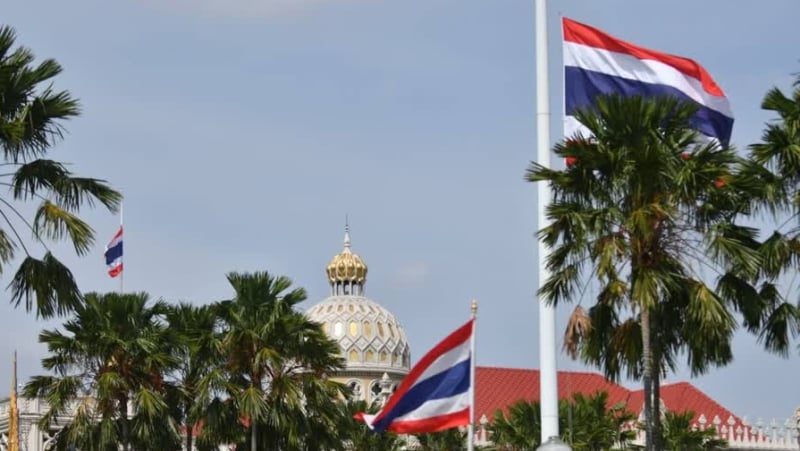 "The government feels deep sorrow at the death of Queen Elizabeth II who has been a highly respected figure of the international community," Anucha Burapachaisri, deputy secretary-general to the prime minister and acting government spokesman, said on Friday (Sept 9), reports the Bangkok Post.

He said that caretaker Prime Minister Prawit Wongsuwon had ordered all government agencies and state enterprises lower the national flag to half-mast for three working days ‒ on Friday, Monday and Tuesday.

Gen Prawit would visit the British embassy in Bangkok to sign his name in a condolence book, Mr Anucha said.

“I have learned with profound sadness of the passing of Her Majesty Queen Elizbeth II. On behalf of the Royal Thai Government and the people of the Kingdom of Thailand I would like to extend our deepest condolences to you in this time of sorrow.

“Her Majesty’s tireless compassion and dedication to the United Kingdom and the global community throughout 70 years of Her Majesty’s reign has been praised and admired all over and will always be remembered.

“Her Majesty’s trips to Thailand in 1972 and 1996 will be cherished and remain in our hearts.

“During this moment of bereavement, our thoughts and prayers are with you, the Government of the United Kingdom and the British people.”

The Foreign Ministry this morning released the following statement:

“The Ministry of Foreign Affairs and the people of the Kingdom of Thailand wish to express our deepest sorrow at the passing of Her Majesty Queen Elizabeth II of the United Kingdom of Great Britain and Northern Ireland.

“We share with the British people and the international community in mourning this great and irreparable loss.”

The death of Queen Elizabeth II sets in motion a finely choreographed plan honed and planned to the last detail over decades. Full details are yet to be confirmed but here AFP reports what is known so far about how the coming days will unfold.

The queen’s coffin draped in the Royal Standard flag is expected to remain at her Scottish estate, Balmoral, where she died, for a few days.

King Charles III is scheduled to make his inaugural address to the nation as king on television on Friday around 6pm (midnight Thailand time).

Gun salutes will be fired in Hyde Park and at the Tower of London at 1pm (7pm Thailand time).

The new monarch will hold his first audience with Prime Minister Liz Truss.

Church bells will toll across the country, with churches, chapels and cathedrals encouraged by the Church of England to open for prayers or a special service for mourners.

The prime minister and senior ministers will attend a public service of remembrance at St Paul’s Cathedral.

An online book of condolence has been opened for members of the public to leave messages.

Day 1: The 10-day plan for the days after the queen’s death begins with the Accession Council convening for Charles to be formally proclaimed king.

Three trumpeters announce the proclamation with a fanfare. The proclamation is read out from a balcony at St James’s Palace in London, then across the country.

Charles will hold audiences, and the media will be briefed by the Earl Marshal, a high-ranking royal official in charge of the accession and the queen’s state funeral, in the coming days.

Day 2: The queen’s coffin is expected to be transported from Balmoral to the Palace of Holyroodhouse, her official Scottish residence in Edinburgh.

The journey by road will pass through many small towns and villages, giving members of the public their first chance to pay their respects.

Preparations for the queen’s death in Scotland are codenamed “Operation Unicorn” after the country’s national animal.

Day 3: Charles is expected to begin a tour of England, Scotland, Wales and Northern Ireland, the four nations of the United Kingdom in an operation codenamed “Spring Tide”.

The queen’s coffin is expected to be taken in a procession up Edinburgh’s Royal Mile from Holyrood to St Giles’ Cathedral, where there will be a service and a vigil attended by royal family members.

Day 4: The coffin is expected to be flown to the capital and transported by road to Buckingham Palace in London.

Members of the public will likely line the route.

Day 5: A ceremonial procession of the coffin through London is expected followed by a lying in state in parliament’s Westminster Hall, codenamed “Operation Feather”.

Senior members of the royal family are expected to stand guard around the coffin in a tradition known as the Vigil of the Princes.

Days 6, 7 and 8: Lying in state. The public can pay their respects, filing past the coffin on its catafalque.

Day 9: A reception to be held for visiting dignitaries and heads of state who have arrived for the funeral.

Day 10: The state funeral is expected to take place in Westminster Abbey with huge crowds gathering in central London.

Senior members of the royal family are likely to walk behind the coffin as it is taken on a gun carriage to the abbey with a two-minute silence observed.

Afterwards, the queen’s coffin will be taken to Windsor Castle for a televised committal service at St George’s Chapel.

She will then be interred privately at the King George VI memorial chapel, alongside her husband, Prince Philip, the ashes of her sister Princess Margaret, their mother, also called Elizabeth, and father George VI.