PHUKET: Lifeguards at Patong Beach rescued a 25-year-old Taiwanese man this morning (June 22) after scouring the waters offshore for some 30 minutes. 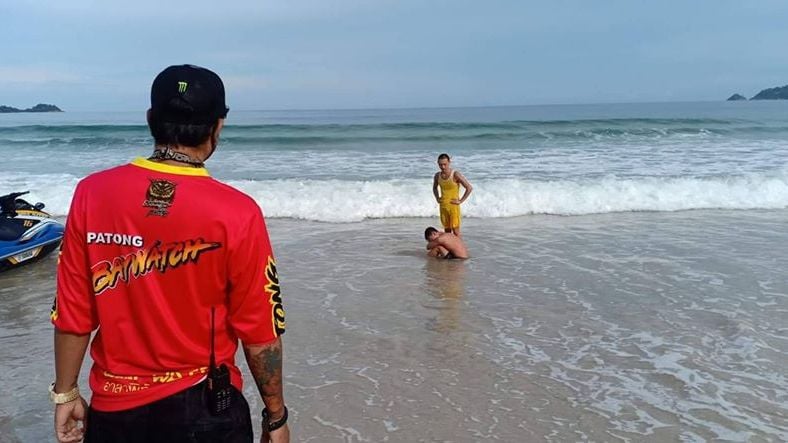 The Taiwanese man after being brought back to shore alive at Patong Beach this morning (June 22). Photo: Patong Surf Life Saving Club

Lifeguards at the beach confirmed to The Phuket News that they were unaware that the man was missing, last seen in the surf at the southern end of the beach, until notified by police.

Maj Chanan Makchai of the Patong Police explained that he was notified of the missing Tawainese man, who he declined to name, at 7:30am.

Lifeguards were informed at 7:45am, and the search began.

However, with the man not found in the waters off the southern end of the beach, the search was soon expanded, and the man was brought ashore near Loma Park, some 1.6 kilometres further north, at about 8:15am, Maj Chanan said.

The man who called police was a fellow Taiwanese national, and a friend of the man rescued today, Maj Chanan added.

The friend told police that he last saw the man drunk and walking around at the southern end of the beach, Maj Chanan said.

The friend explained that the man was in deep grief as a close uncle of his had just died.

“He was depressed and wanted to commit suicide by walking to the sea and drown,” Maj Chanan said.