PHUKET: The body of a 57-year-old Swiss woman who is believed to have been raped and murdered was found in a creekbed near the Ao Yon Waterfall in Wichit, on Phuket’s east coast, yesterday afternoon (Aug 5). The woman’s body was found in a creekbed near the Ao Yon Waterfall. Photo: Eakkapop Thongtub

The woman’s body was found in a creekbed near the Ao Yon Waterfall. Photo: Eakkapop Thongtub Personal items were found at the scene. Photo: Eakkapop Thongtub

A pair of denim shorts were found discarded nearby. Photo: Eakkapop Thongtub 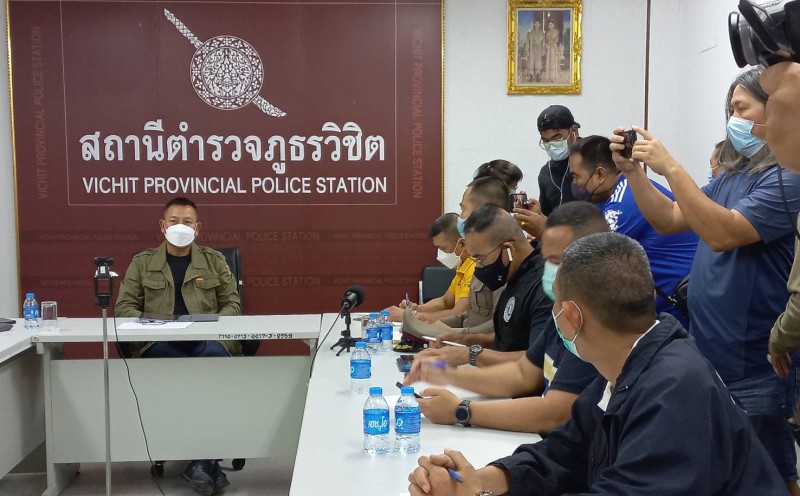 Region 8 Police Commander Lt Gen Kitrat Panpetch held a special press conference at Wichit Police Station last night and confirmed that the woman had arrived on the island on July 13.

The woman’s body was found by Nattapong Sridum, 31, a local resident in Wichit.

Her body was covered by a black sheet, obscuring it from view by any passers-by along the road some 40 metres away. However, her feet were exposed and could be seen, Lt Gen Kitrat said.

Forensic investigators believe the woman had died at least 48 hours before her body was found.

However, her body was now being examined to confirm the cause of death and other factors, Lt Gen Kitrat said.

Investigators at the scene found that her body was naked from the waist down. A pair of denim shorts was found discarded nearby, as were a pair of Nike trainers and her phone.

“The deceased was a foreign woman who had repeatedly returned to Phuket, which is a tourist city and a pilot model of being a tourist city under the New Normal in the era of the COVID epidemic crisis,” he said.

“This may affect the image of the safety of foreign tourists,” he added.

Lt Gen Kitrat said it had yet to be confirmed whether or not the woman had arrived as a tourist under the Phuket Sandbox scheme or as a different type of visitor.

“Gen Suwat will travel to the area tomorrow [Aug 6] to monitor the progress of the case by himself,” he noted.