PHANG NGA: A 30-year-old Thai man is facing a charge of reckless driving causing death after his motorbike struck a Swedish woman crossing the main highway through Khao Lak, north of Phuket, on Saturday night (Nov 9).

transportaccidentstourismdeathpolice
By The Phuket News 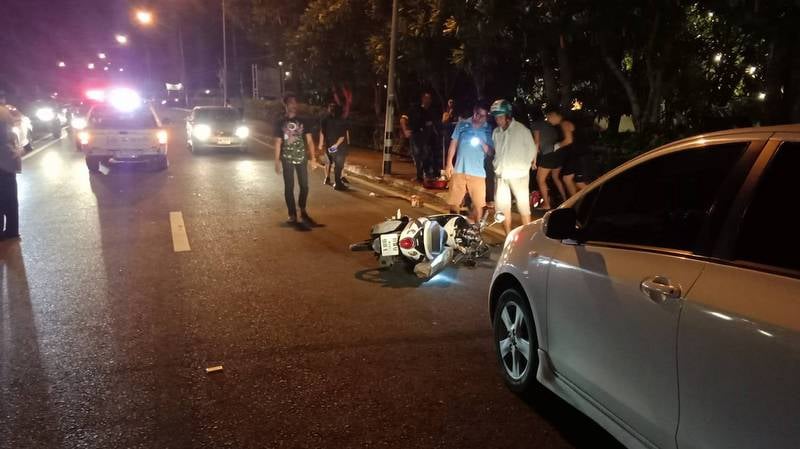 The scene of the accident on Saturday night (Nov 9). Photo: Khao Lak Police

The 64-year-old Swedish tourist*, from Enskede, outside Stockholm, was struck by the Honda Fino motorbike while walking across Phetkasem Rd at the southern end of the beach, Col Suwat explained.

The woman suffered critical head injuries and was rushed to Takaupa Hospital.

“We received a call from the hospital informing us that she passed away at 10:55pm that night,” Col Suwat said.

Swedish embassy representatives were informed of the woman’s death on Sunday, he added.

The rider of the motorbike, Tossapon Phusakun, 30, suffered a broken collarbone as well as injuries to his head and scratches to his body, Col Suwat noted.

“He is still in Takaupa Hospital,” he said this morning (Nov 12).

“He was not drunk at the scene, as confirmed by a blood test conducted at the hospital,” Col Suwat said.

A motorbike helmet was found at the scene of the accident, but police have yet to confirm whether Tossapon was wearing it at the time.

“He is not able to be questioned at this time. I must wait for his condition to improve. I will be able to question him then,” Col Suwat said.

“He will be charged with reckless driving causing death,” Col Suwat confirmed.

Police in Khao Lak will add extra road safety measures in the hope of preventing any similar accidents.

“We will be more strict on enforcing the speed limit and we will have checkpoints set up more often,” Col Suwat said.

“We want to warn tourists that the main road through Khao Lak is wide and it is poorly lit. Please be careful when crossing the road,” he added.

“I have reported to Phang Nga Governor Chamreon Tipayapongthada about how dangerous this road [Highway Route 4] is through the Khao Lak area.

“He will lead a meeting about the safety measures that could be implemented next Friday (Nov 22),” he said.