Sustainably Yours: The importance of Phuket’s mangroves

Sustainably Yours: The importance of Phuket’s mangroves

Mangrove forests are an overlooked attraction on Phuket. They are not places that you will find most tourists, who generally favour our sunny beaches and raucous nightlife, but with the recent announcement that the forests east of Phuket Town will be developed into an eco-tourist attraction, perhaps that will soon change. A dense thicket of mangroves. Fishermen bring in their catch. 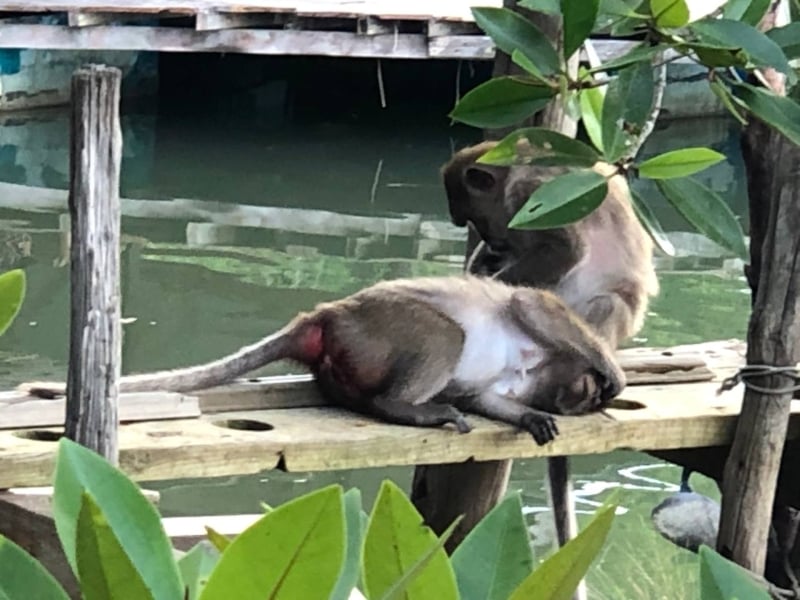 Monkeys sunbathing on the pier.

These dense thickets of trees with gnarled roots, that grow into the muddy soil, filled with saltwater, were once mistaken for worthless swamps that didn’t serve any real purpose other than to breed mosquitoes.

However, once you understand their interconnectedness to the surrounding ecosystems, and how they protect our island against flooding, and erosion and provide a home for thousands of species of insects and animals, you will begin to see how amazing and beautiful they are.

The Phuket mangroves line the east coast of the island, stretching from Cape Panwa in the south up to Saphan Hin and Koh Siray in the middle up to Baan Bang Rong and Baan Ao Kung in the north.

In the fight against climate change, they are one of our most powerful weapons and can sequester four to five times more CO2 than a tropical rainforest of comparable size. Every hectare of mangroves can store an estimated 554,000kg of carbon making them one of the most important terrestrial-based defences.

The reason these salt-tolerant trees and shrubs act as storage powerhouses is that when leaves and branches fall into the low-oxygen soil they don’t break down and their carbon is stored there, unlike in a regular forest where organic matter eventually degrades and releases its CO2.

It is also due to the complex root system of the mangrove trees that captures sediment and turns it into soil, which builds new roots. This combination of soil and root building allows mangroves to suck out large amounts of carbon from the air and store it within the tree and the ground.

The Value of Mangroves

Not only do these forests store carbon, but also their tree branches are homes to monkeys, birds, snakes and lizards, while their submerged roots act as nurseries for fish, crabs, lobsters and other marine animals.

Their true value became apparent in 2004 after the tsunami that devastated Phuket. Areas where mangrove forests were left standing fared much better than those that were torn down. This is because when storm surges strike the coastlines the densely packed trees bear the brunt of the force from the waves, often sparing the villages behind them by reducing flooding and erosion.

Mangroves also help keep the ocean clean by absorbing pollution, and excess nutrients from fertilisers, which can make it into the ocean causing algal blooms, which lead to dead zones.

These forests are so valuable that one study estimates that over their lifetime each hectare provides approximately US$600,000, worth of services, which translates to about US$37,500 per year.

Despite their immense economic value, it is estimated that between 50-60% of mangroves in Thailand have been destroyed.

According to Dr Vipawee, a biologist and botanist at Prince Songkhla University, from the 1970s through the ’90s the mangroves were turned into shrimp farms, cut down for their wood that was turned into charcoal briquettes, and developed into real estate. Although they are protected today, mangrove forests are still under threat from pollution, developers and illegal encroachment.

The Department of Marine and Coastal Resources (DMCR) is responsible for maintaining the mangrove forests, but with little funding the government is turning to tourism. The Ratsada Municipality recently announced that the area east of Phuket Town and north of Koh Siray will be used for eco-tourism, starting with 100 rai. it will eventually expand to 1,234 rai.

However, using tourism to protect the mangroves isn’t new. Baan Bang Rong, located in the northeast of Phuket, launched a successful community-based tourism scheme in 2015 as a way to monetise and protect its mangroves. This Muslim village is known primarily for its pier where tourists can catch a speedboat to Koh Yao, but if visitors stopped to take a look around they’d see an area steeped in history.

At one time Bang Rong served as a busy hub for transportation and trade, but today it is a sleepy fishing village surrounded by a lush mangrove forest. However, it wasn’t always this way. According to Prasert Ritraksa, President of the Baan Bang Rong Community Based Tourism Club, just over 20 years ago the area was denuded of trees, after a government programme incentivised locals to cut them down so they could be turned into charcoal and shipped overseas. This caused the fish and crab population to collapse and left fishermen without a way to earn an income.

That’s when Khun Prasert decided to restore the mangroves through a combination of reseeding and planting saplings. Today most experts advocate rewilding over replanting as it creates healthier, more biodiverse forests, but at the time replanting was the only thing anybody knew about.

The process was slow going at first and was met with little enthusiasm from others in the community. The project started in 1999 and cost a total of about B20,000.

The timing was fortunate because in 2004 the tsunami hit. But, unlike other villages, the mangroves bore some of the brunt of the water rushing in and helped keep Bang Rong from flooding worse than it did. It also saved lives by preventing the debris from tearing through the community.

The community-based tourism project started seven years ago and includes a cruise through the mangrove forest on a longtail boat or in a kayak, a cooking lesson, harvesting pineapples, picking coconuts, touring a rubber tree plantation, and releasing crabs with their eggs into the seagrass.

Khun Prasert says that the goal is to teach visitors about traditional Thai culture.

Find out more about the project by going to BangRongConnect.com