SAILING: “Super happy” Luna Rossa moved into a strong position to challenge Team New Zealand for the coveted America’s Cup by taking a 4-0 lead in the challenger series final in Auckland yesterday (Feb 14). 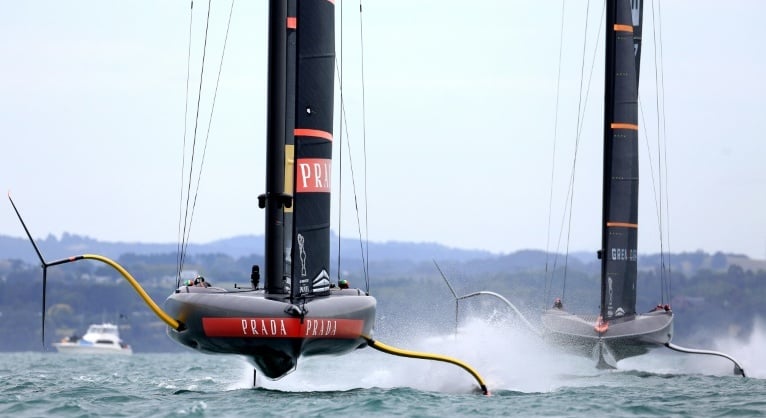 Luna Rossa (left) has moved into a strong position to challenge Team New Zealand for the America’s Cup. Photo: AFP.

But it was unclear when the next races in the best-of-13 series would be held, after Auckland was placed in lockdown late yesterday following a fresh coronavirus outbreak.

“As a result of the government announcement of a level three lockdown in Auckland, initially for 72 hours, the next scheduled race day on Wednesday has been postponed,” organisers said in a statement.

They added that there would be a meeting with authorities in the next few days to work out the ramifications.

After winning the first two races against Ineos Team UK on Saturday in light winds which favoured the Italian boat, Luna Rossa dominated races three and four in stronger winds when gifted the start by critical errors from Ineos skipper, the acclaimed British yachtsman Ben Ainslie.

Once in front, the outcome was never in doubt as Luna Rossa helmsman Jimmy Spithill covered every move by Ineos to hold the lead through to the end.

“Today’s racing was all about getting off the line in front which we did a great job of and then just a ‘foot-on-the-throat’ approach,” Spithill said.

“The boys on the handles did an outstanding job, tack for tack and we were gaining every time.”

It leaves Luna Rossa, owned by Prada fashion house boss Patrizio Bertelli, needing only three more wins to take the series with Ineos yet to get on the board.

At stake for the winner in the best-of-13 challenger final is the right to race holders Team New Zealand for the America’s Cup, professional sport’s oldest trophy and yachting’s Holy Grail.

“It was a tough day, we’re not happy with it. We can sail a hell of a lot better than that, and we need to,” Ainslie said.

“We just gave two races to those guys off the start line. At this level, you can’t afford to make mistakes and we made too many.”

Ainslie fluffed the start of race three when he drew the favoured port entry into the starting box and was outmanoeuvred by Spithill, who crossed the finish line 13 seconds ahead.

In a pre-start manoeuvre 30 seconds before race four began, the British lost control of Ineos which reared up before falling back into the water.

Although they were back on their foils by the time they crossed the start line, Luna Rossa had the advantage and sailed away to win by 41 seconds.