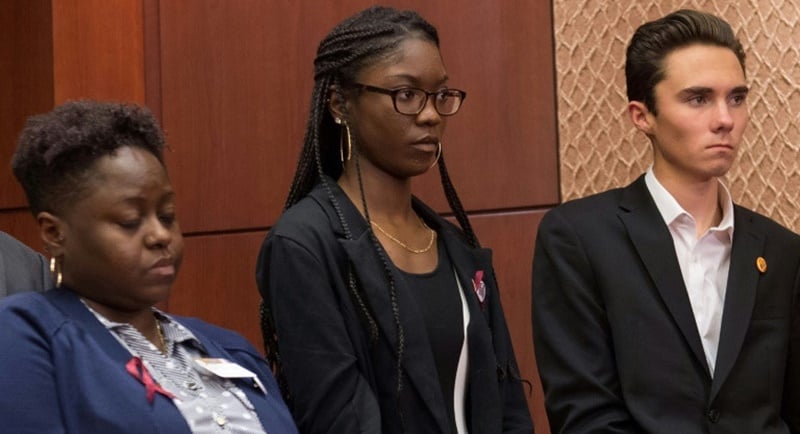 Marjory Stoneman Douglas High School student Aalayah Eastmond (centre) hid beneath the body of a classmate during last month’s shooting at her school and will be taking part in tomorrow’s (Mar 24) march for gun control to represent him. Photo: Saul Loeb / AFP

The 17-year-old says she will be marching not only for tougher gun laws – but for the classmate whose body she hid beneath during last month’s massacre at her school.

“The march is just the start,” she said at an event with lawmakers, prosecutors and members of law enforcement on Capitol Hill.

“We will fight for this until change happens.”

Fourteen students and three adult faculty members were killed on February 14 at Marjory Stoneman Douglas High School in Parkland by a troubled 19-year-old former classmate armed with a semi-automatic rifle.

Students at the school in southern Florida are the driving force behind the “March For Our Lives”, which is to be held tomorrow in Washington and other US cities.

The event is expected to be the largest-ever protest for gun control in the United States, where there are more than 30,000 gun-related deaths a year.

Organisers say more than 800 marches are being held across the country and around the world under the slogan #NeverAgain – the Washington event alone is expected to attract at least 500,000 people.

Eastmond was in a Holocaust history class when Nikolas Cruz sprayed bullets into her classroom shortly before school was due to end on Valentine’s Day.

She hid under the body of Nicholas Dworet, a 17-year-old senior who had been planning to attend the University of Indianapolis in the fall.

“No student should have to cover themselves with a deceased classmate to survive,” said the teenager with oversized glasses and long dreadlocks.

“I was that student.”

Eastmond’s mother, Stacey-Ann Llewellyn, who will be marching with her daughter in Washington tomorrow, said lawmakers need to tighten gun laws now.

“I want to be able to send my daughter to school and be at work and not get a phone call and hear shots in the background,” Llewellyn said.

“I got my baby back. But what about those 17 people, their parents, their loved ones? What do they have to go through?” she asked. “The laws need to change and need to change now.

“Listen to the kids,” Llewellyn said. “I’m standing with my daughter. She’s here for Nicholas. She hid under his body. She’s here to represent him.”

Tomorrow’s march is the latest event organised by the Stoneman Douglas students, who have launched the largest US grass roots movement for gun control seen in decades.

Under the banner #ENOUGH, tens of thousands of students walked out of classrooms across the country on March 14 to protest against gun violence.

David Hogg, a Stoneman Douglas student, said another school walkout was being planned for April 20, the anniversary of the 1999 shooting at Columbine High School in Colorado, which left 13 people dead.

Hogg said it is time for lawmakers to take on the powerful US gun lobby, the National Rifle Association (NRA).

A slew of American celebrities have pledged $500,000 (B15.62 million) donations to support tomorrow’s march.

Senator Richard Blumenthal of Connecticut, where 20 children aged six and seven years old were killed at Sandy Hook Elementary School in December 2012, praised the students yesterday for their activism.

“We are in the midst of a new social movement, much like the civil rights movement, marriage equality movement, the anti-war movement,” Blumenthal said.

“That has always been the way change, particularly revolutionary change, has been accomplished in this country,” he said.

“Armed teachers is toxic lunacy,” he said. “What kind of country are we that says the new normal is bulletproof backpacks and armed teachers?”

Since the Parkland shooting, the state of Florida and the US Congress have made only modest tweaks to gun laws.

They have failed to adopt legislation promoted by gun control advocates such as a ban on assault rifles and expanded background checks which would cover all gun purchases, even private sales.