SAILING: A stiff breeze of 15 to 20 knots off south-western Phuket yesterday morning (Dec 5) provided near perfect conditions for the large fleet of boats contesting this year’s King’s Cup Regatta, allowing the organizers to hold three races in some classes. 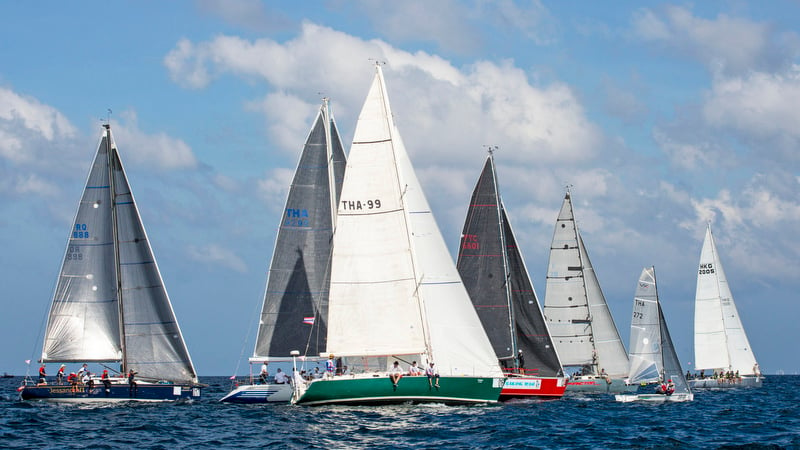 While some boats in the slower sections of the 11 classes only managed one race, the two fastest keelboat classes and one of the multihull classes squeezed in three races, largely because of their speed around the ocean courses.

Sarab Singh on his boat Wind Sikher took the honours in the third and final race in the IRC Zero Class. Little separates the top three TP 52-design boats on the water with Ray Roberts new campaign proving the solid leaders.

Dan Fidock maintained his lead in the Racing Multihull Class on his small but speedy trimaran Fugazi, again seeing off the challenge from the large 60-foot speed machine SHK Scallywag Fuku Bid. Few boats can even go close to matching the speed of the much larger Scallywag in strong breezes, but Fugazi proved to be no slouch and came out on top after handicaps were taken into consideration.

Closer to shore, racing was underway in the International Dinghy Classes, with a large number of junior sailors testing their skills off Kata Beach. Almost 100 junior sailors are contesting the various dinghy classes. Experienced King’s Cup keelboat sailor Commander Peera Sagultan of the Royal Thai Navy is the Dingy Race Officer, overseeing the 97 young sailors on the water.

“We had good wind today of 15 to 20 knots and some exciting racing,” he said. “We had four races today (Wednesday) and will have a total of 12 races by the time we finish up on Saturday. We have Optimists, Lasers and 420s racing.”

One result that surprised no one was a first place finish in the Optimist Class on Wednesday by 13-year-old Panwa Boonak, an Asian Sailing Championships winner and a member of the Thai World Championship team. Up-and-coming sailor M.L. Weka Bhanubandh Na Ayuttaya showed great skills despite his young age in the Optimist Class with a second place finish, followed by Patihan Vorrasart in third place.

While the International Dingy Sailors will continue racing today (Dec 6), it will be a rest day for the rest of the fleet at this year’s Phuket King’s Cup Regatta, giving crews a well-deserved rest and skippers and owners time to fine tune or repair their boats. The keelboat and multihull action gets underway again on Friday off the southern tip of the resort island.