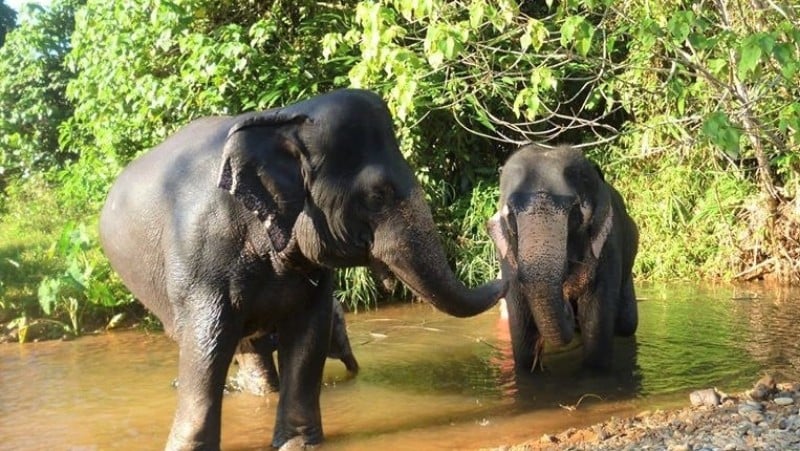 The Southern Thailand Elephant Foundation (STEF) is keeping up its work to help elephants left in dire circumstances due to the pandemic’s impact on the economy. Photo: STEF

A survey in 2019 recorded 401 domesticated elephants in Phang Nga, whereas the most recent figures from the department of provincial livestock gives the current number as 270, the UK-registered charity explained in a release issued today (May 6).

This fall in elephant numbers is linked directly to the pandemic and the decimation of Thailand’s tourist industry (even now there is a COVID emergency decree in place in Thailand).  Without tourists to visit the elephant parks and sanctuaries that abounded in the region, there is no income and therefore no money to buy food for the elephants.

The realisation that the COVID-19 lockdown would affect the tourist industry for the long term meant that many mahouts had little choice but to return to their homes and families, many of which are in the north of Thailand. Of course, they took their elephants with them, and so, at least for now, Southern Thailand has been depleted of its elephant population. Some owners transported their elephants to Surin, a major elephant centre in northern Thailand, from where some government support is being provided during the pandemic. But this is a journey of about 800 miles (more than 1,200km), and many owners cannot afford the cost of a truck ride for their elephant over such a distance, STEF explained.

Most of the elephant parks and camps in Southern Thailand are now closed, and some will never reopen. Only a few parks or sanctuaries are still operating, and these are managing to care for their elephants only as a result of their own fundraising efforts. Some of these parks have even taken in other elephants from owners who were struggling to feed them. Adult elephants drink around 100-200 litres of water a day and consume 200-300kg of vegetation, costing around £10 (just over B430) a day to feed.

When the lockdown first came to Thailand, many elephant parks in the region had closed almost overnight and simply told the elephant owners to remove their animals. But these owners were mostly mahouts who had one or two elephants contracted to a tourist park. Without any income from the park, the mahouts were left struggling to feed their elephants and they had no money to send back to their families, STEF noted.

It is not practicable to let domesticated elephants roam free to find their own food, as there isn’t enough natural forest left in Thailand. These elephants are used to being cared for by humans and, left on their own, would be unlikely to be accepted by a wild herd and would probably struggle to find adequate food; there would be inevitable conflict with farmers and landowners as well as the risk of severe injury on roads, the foundation explained

Aware of the impending crisis as the parks closed their doors, the Southern Thailand Elephant Foundation (STEF) stepped in to provide food for the elephants in need. The ‘Feed the Starving Elephants’ campaign, which ran from April to July last year, raised over £40,000 (about B1.736 million) and volunteers on the ground in Southern Thailand delivered over 700 truckloads of food. As the drift north began last summer, and the number of elephants in the region declined, STEF was able to wind down its campaign.

When tourists eventually return to Southern Thailand in significant numbers, hopefully the elephants will return too. For so many people, the chance to get up close, to stroke and feed these magnificent creatures is the highlight of their holiday, STEF noted in the release .

The Southern Thailand Elephant Foundation (STEF) is a UK-registered charity run almost entirely by volunteers. Since it was founded in 2017, STEF has raised funds to build a new Elephant hospital – the STEF Veterinary Centre Khok Kloi – in Phang Nga province, north of Phuket.

For the last four months STEF has been providing a mobile veterinary clinic, run by their veterinary officer Dr Aon, who has treated numerous clinical cases in the region as well as providing health inspections and general advice. All these services are provided free of charge, and are vital in helping to care for the many elephants remaining in Phang Nga and adjacent provinces.

STEF continues to raise funds to provide all the necessary veterinary equipment needed for its elephant veterinary centre, which is due to be fully operational within the next two months.

The only other elephant hospital in Southern Thailand is the government funded Krabi hospital which is three hours’ drive by car (about four to five hours in an elephant truck).

STEF is dedicated to protecting Asian Elephants in Thailand by providing health care, promoting high standards of welfare and conservation, and encouraging education, so that elephants can maintain their important role in Thai culture for generations to come.

For more information about STEF,  email info@southernthailandelephants.org or visit SouthernThailandElephants.org