PHUKET: Officers from the Royal Thai Navy Third Area Command successfully recovered a metal sphere from the seabed off Phuket today (May 17) that has now been confirmed to be a discarded fuel tank for a rocket, satellite or other object heading for, or already in, orbit. 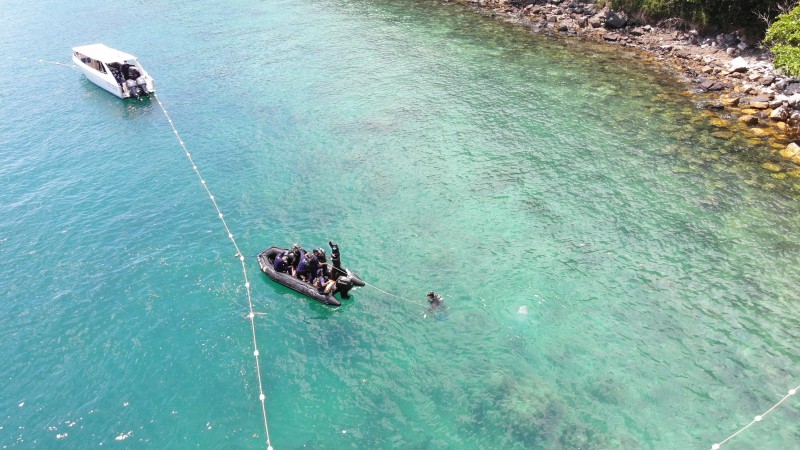 “The Third Regional Operation Center of the Thai Maritime Enforcement Command Center [ThaiMECC3] was informed by local fishermen on May 1 that they found a suspicious object which looked like a bomb near Koh Ael,” he said.

“Explosive Ordnance Disposal (EOD) officers went to examine and assured that the item was not a bomb or contained toxic substances,” he added.

“The EOD officers send photos [of the object] to the Naval Ordnance Department, which later confirmed that the item is a part of a space shuttle,”

“Later, ThaiMECC3 sent photos of the object to the Geo-Informatics and Space Technology Development Agency [GISTDA] to check, and they confirmed that the item is a fuel tank for an object heading for space.”

The fuel tank was believed to have previously contained hydrazine (NH2NH2).

“GISTDA staff and officers of the Department of Marine and Coastal Resources have examined the tank and found that all of the hydrazine (NH2NH2) had been used. The tank has not had any effect on the natural resources in the surrounding area,” V/Adm Cherngchai said.

“While collecting the tank, all officers wore proper suits and equipment, so I am sure that the work [salvage operation] had no effect on the sea. We care about our officers and the impact on the marine environment,” he added.

“The tank will be examined again for studying and displayed in the museum of GISTDA,” V/Adm Cherngchai said.