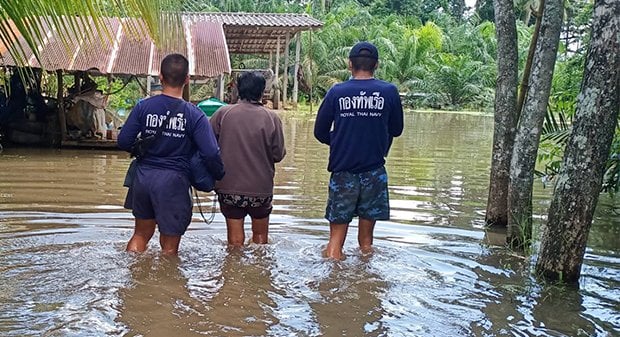 The latest deaths raised the toll of the victims to 24, with the region pounded by rain brought by the northeast monsoon over the Gulf of Thailand since Nov 25. The floods are the most extensive in recent years.

The deluge has resulted in residents of more than 555,000 houses being flooded out. Nakhon Si Thammarat is the hardest hit with 19 deaths and 180,000 houses swamped.

Although the situation was eased, more flooding was reported in Surat Thani, Trang and Songkhla, even as water levels in other provinces were slowly subsiding, the department update said.

The weather forecast was for less rain along the Gulf coast today, but more rain for up to 60% of the area for the rest of the week.

Prime Minister Prayut Chan-o-cha arrived in Nakhon Si Thammarat this morning. His first stop was a royally-sponsored Silpacheep project at Ban Noen Thammang in Chian Yai district, where officials were waiting to fully brief him on the situation.