With the global pandemic and the lack of tourists, you would think that our beaches would be pristine and clean, but you’d be wrong. Despite our lack of visitors, the beaches are still inundated with plastic water bottles, bags and cigarettes, which means some of it is coming from us. 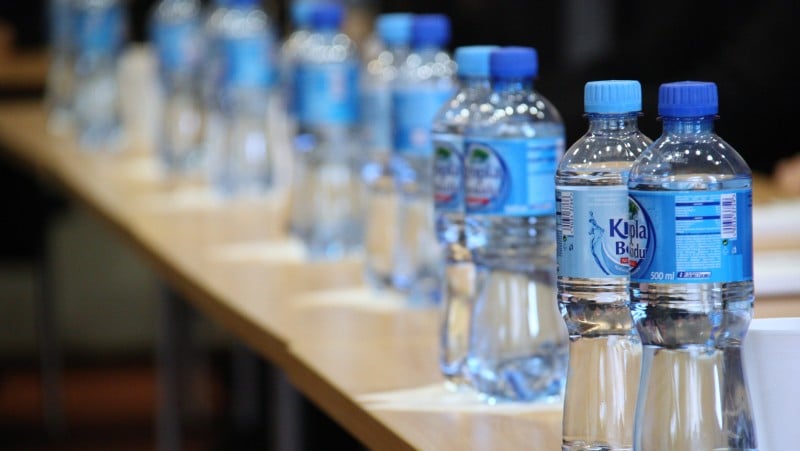 Bottled water is expensive, killing the planet and possibly harming us through microplastics in the water. Photo: Pixabay When given an option, most smokers will use an ashtray if one is provided. Photo: Palmer Owyoung Using a tap filter can save you thousands of baht a year. Photo: Brita According to the non-profit EcoWatch, cigarette butts are the number one form of litter, followed by food wrappers, plastic drink bottles, and bottle caps, and grocery bags.

A recent study led by the Institute for Global Health in Barcelona concluded that bottled water uses 3,500 times more resources and causes 1,400 more times damage to the ecosystem when compared to drinking tap water. If that doesn’t convince you to stop drinking bottled water, here are seven more reasons.

1. Pollution ‒ The world uses over 100 million plastic drink bottles every day, of which we recycle only 1 out of 5. The rest end up in landfills, on our beaches and in our waterways.

2. It’s expensive ‒ Bottled water is 240 to 10,000 times higher than what you pay for tap water. You are paying for the branding, processing and transportation of the water. According to one estimate, you can save about B12,500 per year by drinking filtered tap water.

3. Your health ‒ Most people drink bottled water because they think it’s healthier, but it’s not. A study from the World Health Organization found that 93% of the most popular water bottle brands had microplastics in them. Because there haven’t been long-term studies on the effects on human health, we’re not sure what they are doing to us. But some preliminary studies suggest they may be linked to both cancer and infertility in humans and animals.

An investigation by the non-profit Environmental Working Group (EWG) revealed that many major water brands carried toxic chemicals, including fertiliser residue and disinfecting products, above state safety limits. Many of the brands tested were also nothing more than tap water, despite costing up to 1,900 times more.

4. Taste ‒ In multiple taste tests, drinkers could not discern between bottled and tap water.

5. Corporate profiteering ‒ Clean drinking water is a basic human right. However, the public has been complicit in allowing corporations like Coca-Cola, PepsiCo and Nestle to exploit us by continuing to purchase their products. The bottled water industry remains one of the fastest-growing on the planet and made US$200 billion in 2020 and is expected to grow at 11.1% per year through 2028. Boycotting bottled water means that you recognise that public access to clean, safe drinking water is a right.

6. It’s depleting clean water ‒ It takes three bottles of water to make a single bottle of water when you account for the drilling for the petroleum to make the bottle and the processing and transportation of the water. As the population grows and droughts and other climate-related events hit us, clean water will become more and more scarce.

7. Climate change ‒ We use 100 million plastic bottles every day around the world. This requires lots of oil to produce them, and all of that water is heavy and needs to be transported across the country. From the most commonly cited study, the CO2 footprint for 1.5 litres is about 200 grammes per bottle. The average water bottle drinking household will consume about 800 bottles per year, which translates to 160kg CO2 or the equivalent of driving 368 miles (592 km) with a car.

The easiest thing to do is to buy a Brita water filter for your tap. These cost under B3,000. You also buy a water filter jug or water filter bottle both cost less than B2,000 and can save you thousands over a year. You can purchase these online at Lazada.

Some people don’t like the taste of plain water or the flatness of still water. The answer is to buy a soda machine that allows you to make carbonated water at home. If you don’t enjoy plain water, you can buy flavoured syrup like Teisseire from Villa Market and add it to either sparkling or flat water. This will not only reduce your carbon footprint, but will also reduce the number of plastic bottles that you use.

Beach clean-ups are one of the best ways to keep plastic waste from entering the ocean, killing wildlife, and entering the food chain. A newly formed Facebook Group called Phuket Beach Cleanup started by Brad Barichievy, a recent transplant from South Africa, makes it easy to help keep your local beach clean.

You should also boycott the major bottled water producers and their subsidiaries. These include Coca-Cola, PepsiCo and Nestle.

In 2019, Patong took the Plastic Smart City pledge to eliminate its plastic waste by 2030. Installing and maintaining clean water refill stations along the beach would help to achieve this goal.

One simple solution for keeping cigarette butts off the beach that we’ve been using in Kamala is to tie a used metal oatmeal can (plastic bottles will burn) to a nearby tree or bench. Smokers often congregate in the same areas and when presented with the option of using an ashtray, they usually will. This has kept thousands of cigarette butts off the beach and from entering the oceans.

If Phuket wants to continue being a world-class destination, it needs a clean ocean with clean beaches, which means it needs to step up its game by solving its plastic waste problem.