PHUKET: A young man splashed himself in red and blue paint at a solo protest at the Dragon Statue on Thalang Rd in Phuket Town yesterday (May 22) to protest eight years of military-led rule. 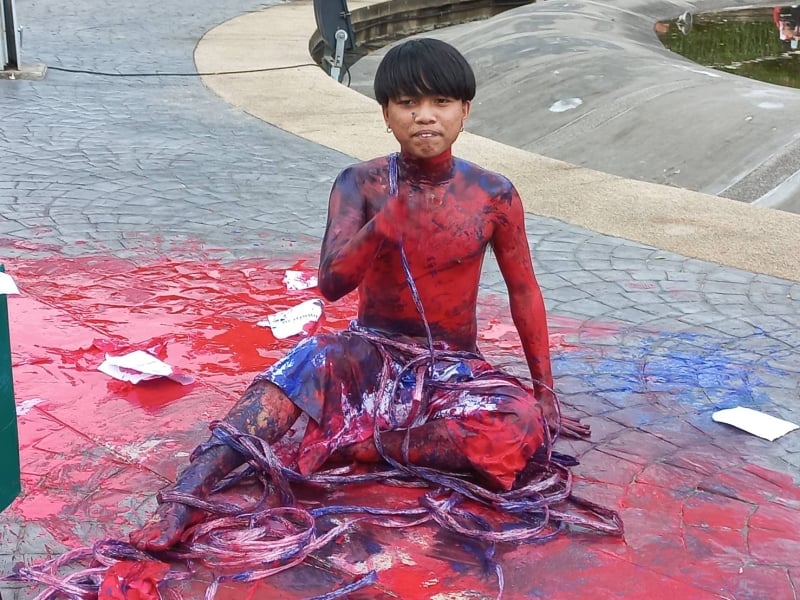 Teerayut ‘Wave’ Sirimas, who presented himself as the the leader of the ‘Phuket Liberation Army’, began his protest at 5:30pm.

Covering himself in red and blue paint, Teerayut called for investigations into how the coup d’etat had made select persons in the country prosperous.

He also called for the people of Phuket to elect their own governor.

Residents in Bangkok yesterday voted in their first election in a decade to elect a new Governor, with independent candidate Chadchart Sittipunt already celebrating victory after the unofficial vote count last night saw him ahead by a “landslide”.

Teerayut said the protest was also in support of other protestors who had been arrested for lese majeste under Section 112 of the Constitution, which protects the Thai Royal Family from any form of criticism. The law is also traditionally used to silence political dissidents.

The location of the protest gained the attention of many people who had parked in the area and were making their way to the popular Lard Yai Walking Street Market held on Thalang Rd every Sunday.

Teerayut ended his protest at 6:30pm, under watch by local police and internal security officers, without incident.