PHUKET: The island’s well-respected animal welfare organisation Soi Dog Foundation (SDF) is working on concentrating its efforts in ‘hot spot’ areas on the island to help contain the spiralling number of strays being incarcerated at the government-run Phuket Stray Dog Shelter in Thalang. 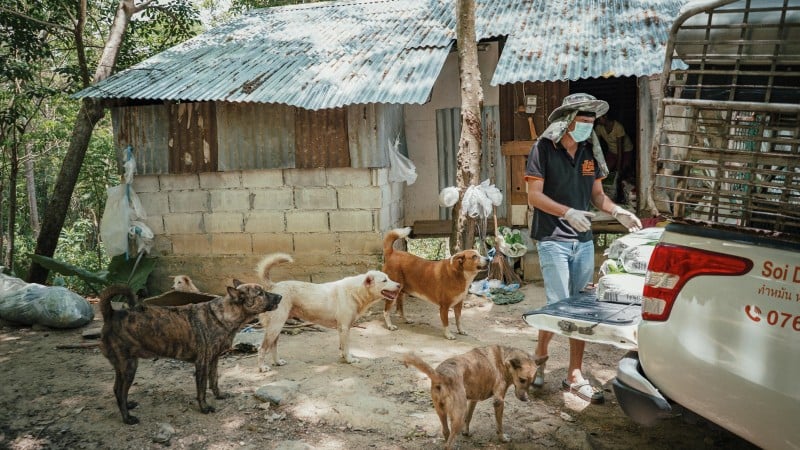 When Soi Dog Foundation began its CNVR (spay/neuter & vaccination) programme in 2003, an estimated 70,000 stray dogs roamed the island. Today, the foundation estimates that number to be around 7,000, a reduction of 90%.

“This proves the case in point, that CNVR is effective. SDF has always maintained that the only sustainable and humane solution to the stray dog population is to perform large-scale sterilisation on stray animals and to encourage owners of free-roaming pets to do the same,” the foundation told The Phuket News in a statement this week.

“In Phuket today, Soi Dog’s CNVR programme focuses on ‘hot-spot’ areas, where stray dogs still congregate, and the foundation is working hard with local communities to bring the stray population even further under control.”

Soi Dog attributes the recent steep rise in the number of dogs at the main government dog shelter in Thalang mainly to the abandonment and the surrendering of pets that people could no longer take care of, typically for either financial or circumstantial reasons.

“This problem has become amplified during 2020, the covid-19 pandemic having a knock-on effect,” the foundation noted.

“It is a tough time, with many families suffering loss of income, and further highlights the need for understanding on the part of pet owners that they should be in a position to be able to care for an animal for the duration of its life – regardless of what obstacles may present themselves. The commitment required to become a pet owner should never be underestimated,” the foundation added.

“Until the nationwide implementation of systems to protect against the rise of the stray dog numbers, such as CNVR programmes, the clamping down on puppy farming and the enforcing of responsible pet ownership, the problem will continue to exist and will prove to be a continual drain on local authority resources – which shelters undoubtedly are.

“SDF welcomes a wider discussion on these topics and is continually open to this and finding the best solution for animal and human communities,” the statement added.

Manas Thepparuk, Chief of Phuket Provincial Office of the Department of Livestock Development (DLD), this week confirmed there are currently 946 dogs being kept at the Phuket Stray Dog Shelter. In 2017, the shelter was home to just over 500 dogs.

“We know that there are already a lot of dogs there, but the dogs are still able to live and have healthy conditions,” Mr Manas told The Phuket News.

However, the ability to fully operate the shelter is under considerable strain as it is facing a serious shortage of funding from the municipalities and local administrations across the island.

“We can take care of them, but the 18 local administrations must respond,” Chief Manas said.

So far only Wichit Municipality has paid its contribution of about B350,000, Chief Manas noted.

If funding does not arrive by March, the dogs “might lack food and medical care”, Chief Manas warned.

On Chief Manas’ behalf, Phuket Vice Governor Phichet Panaphong this week sent a clear message for the 17 municipalities and local administrations to pony up “as soon as possible”.

Chief Manas pointed out that the B3.35mn budget required is just for providing care for the dogs.

“More than that, I require B1.3 million to upgrade the stray dog shelter. We need to fix the fence and signs, make the space for a better atmosphere for the dogs, and to fund medical treatment and workers.”

Mr Manas said that he had filed a formal request to the Phuket Provincial Administration Organisation (PPAO, or OrBorJor), but still had yet to receive an answer.

Meanwhile, Soi Dog Foundation, astutely noted, “One way in which to help alleviate this problem now would be to encourage those looking to add a dog as a new family member, and in a position to do so, to adopt a dog in favour of buying a new pet from either markets or breeders.

“Both Soi Dog Foundation and the government dog pound have many dogs, some of which have been pets until very recently, available for adoption now.“