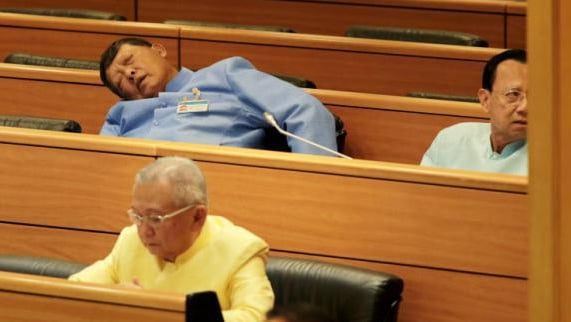 Gen Chalee Chanrueng was one of the two lawmakers caught sleeping on Thursday.

His explanation came after pictures of the two NLA members – Gen Chalee Chanrueng and Dr Thamrong Thassanayachalee – asleep in the chamber on Thursday were widely ridiculed on social media.

Gen Prayut said yesterday he had a chat with NLA president Pornpetch Witchitcholchai and told him to warn all legislators not to sleep during meetings or face being blacklisted from working with him in the future.

Mr Peerasak yesterday said Gen Chalee and Dr Thamrong attended the NLA meeting even though they were feeling unwell.

Mr Peerasak added the two lawmakers were not sleeping while Gen Prayut was speaking about the bational budget and had not committed a breach of disciplinary conduct.

Also yesterday, Gen Prayut vented his frustration that the members of the media were not paying enough attention to the budget deliberations.

“Did you report the B3-trillion budget? You only reported the sleeping NLA members. The issue is nonsense,” he said.

The NLA on Thursday approved the government’s budget for the next fiscal year in the first reading.

After berating the media, the prime minister found time to give sleepy NLA members a bit of advice.

“If they want to sleep, they should sleep at home,” Gen Prayut said.

“For now, let them continue to work until the tenure of the NLA ends.”