CRICKET: Australia’s Steve Smith and David Warner will return to Newlands in South Africa today (Feb 26), less than two years after they were central figures in one of cricket’s greatest scandals at the ground. 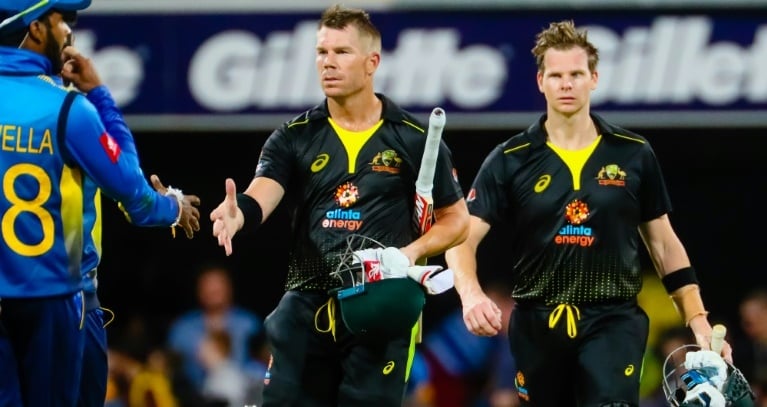 Australia’s David Warner and Steve Smith have featured in the two opening T20 matches of the ongoing series in South Africa. Photo: AFP

They will be playing in a series-deciding third Twenty20 international against South Africa in front of an expected capacity crowd where “maximum security” will be in operation to prevent any abuse of players.

Smith and Warner were captain and vice-captain of Australia on March 24, 2018 when team-mate Cameron Bancroft was caught on television hiding a piece of yellow sandpaper in his trousers during the third day of the third Test.

That evening Smith and Bancroft admitted in a press conference they deliberately tried to tamper with the ball.

It quickly emerged Warner was the instigator in the “leadership group” that decided on the sandpaper ploy.

The incident led to widespread condemnation, including from the then Australian prime minister Malcolm Turnbull.

Smith and Warner were banned by governing body Cricket Australia for a year and Bancroft for nine months.

Furthermore, Warner was stopped from leading his country for life and Smith for a year.

The sandpaper scandal came against the background of an already fractious tour in which Warner became a crowd target after an altercation with South Africa’s Quinton de Kock during the first Test in Durban.

The day before the scandal broke, Warner was abused by a spectator in the members’ stand at Newlands, leading to then-coach Darren Lehmann condemning what he said was the worst personal abuse of players they had encountered anywhere in the world.

Nearly two years on, Smith and Warner have played in front of packed houses in Johannesburg and Port Elizabeth in the first two matches of the series without being subjected to undue abuse.

“We’ve been pretty much overwhelmed by the support we’ve had from the fans,” Warner said.

“Port Elizabeth was outstanding. They were very respectful. I didn’t cop anything (fielding) on the fence. The kids were yelling out for autographs and we obliged. It was a great atmosphere.

“Being back in Cape Town, it is one of the most picturesque grounds in the world, the ground’s always in good condition, we’ve had success here as a team and me as an individual. I’m chomping at the bit to go out there and share it with the rest of the guys,” said Warner.

Clifford Dodgen, the Newlands stadium manager, said he did not anticipate any problems but there would be “zero tolerance” for unacceptable verbal abuse aimed at any player.

“We’ve got maximum security, with over 200 private security personnel as well as police and metro police,” said Dodgen.

“We will have plain clothes people in the crowd and if there is any serious misbehaviour the people responsible will be asked to leave the ground.”

Dodgen said security guards would accompany players leaving or entering the field to prevent a recurrence of the Warner incident in 2018.

Why the person hosting this party was not named? Is he thai, perhaps a family member of a thai Offic...(Read More)

Wise decision of these students not to travel, get infected during flights, bring more virus to Thai...(Read More)

"We expect to stop the virus in 1 month".. Wishful thinking of Patong Mayor, but not real...(Read More)