PHUKET: More than 100 representatives from small hotels gathered at Phuket Provincial Hall yesterday (Aug 24) to continue their appeal for the government to allow them to legally re-open and receive tourists. 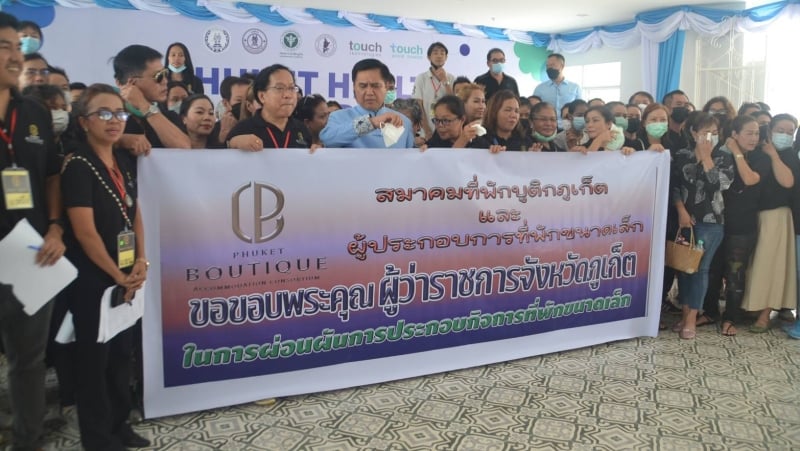 Manosit Jangjob, Acting President of the Phuket Boutique Accommodation Consortium (BAC), submitted yet another formal request to the Phuket Provincial Government for a reprieve allowing small hotels to re-open.

He repeated the explanation that small hotels were not allowed to re-open since an amnesty by the national government expired in August 2021 and that many small hotels could not be registered as hotels under the hotel Act as the required renovations to the buildings were not possible.

As explained when Deputy Prime Minister Wissanu Krea-ngam visited Patong last month, Mr Manosit repeated that many small hotels had been seized by banks and other financial institutions in foreclosure motions for failure to pay loans.

Many other businesses had received government assistance to alleviate the suffering caused by the tourism shutdown during the pandemic, Mr Manosit noted.

“We sincerely hope that we will receive relief assistance this time for members of the association,” he added, pointing out that the formal request included signatures of small hotel owners affected by the situation.

However, he pointed out that any changes to the law will affect business operators throughout the country, not just Phuket.

Mr Somprat assured that the Phuket Provincial Government will issue a letter for small hotel owners to present to any relevant financial institutions in the hope that their financial constraints might be eased.

Mr Somprat also repeated the assurance given by Phuket Vice Governor Pichet Panapong last month that the law would be revised so that businesses with 10 or more hotel rooms and the ability to accommodate 30 or more guests would be required to register as a hotel.

At last report the Hotel Act required that all accommodation owners with venues with five or more rooms that are rented out at daily rates must be registered as hotels.

According to Mr Somprat yesterday, the ‘10 or more rooms’ requirement under the Hotel Act was now in effect.

Mr Somprat also said that the Ministry of Resources and Environment was now in the process of revising the ‘green areas rule’ so that developers needed to reserve only 10 square meters of green space at the minimum.

All six issues raised in the formal petition would be passed on to the relevant national authorities to review so that appropriate measures could be implemented as quickly as possible, he added.