THAILAND: About 53,000 Thais attempt suicide each year – an average of six per hour – and 4,000 succeed in taking their own lives, according to the Department of Mental Health. 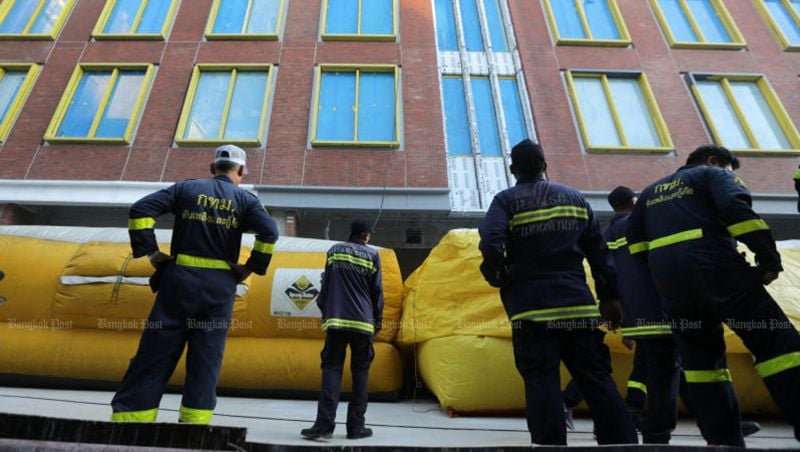 Rescue workers place inflated air cushions at the base of a high rise in Bangkok last year, when a suicidal man on the roof threatened to jump off. Photo: Wichan Charoenkiatpakul

Director-general Kiattiphum Wongrajit said on Wednesday (July 3) the rate of attempted suicide increased to 6.11 people per hour last year, up from 6.03 in 2017.

The suicide rate in men is four times higher than for women. The most vulnerable group is men aged 35-36 years, and the most common age group for women with suicidal thoughts is 50-54.

According to Dr Kiattiphum, mental health disorders such as depression, failed relationships and substance abuse are high on the list of known factors driving people to take their own lives.

He said those who need professional help right away are people with a previous record of attempted suicide.

People who suffer from anxiety or depression are at risk as well, and they could need medication and help from professionals in dealing with suicidal thoughts and feelings.

Other vulnerable groups include people with serious financial problems, those suffering the sudden loss of someone close to them, people with chronic insomnia or on an emotional roller coaster, and those who have previously attempted suicide.

Dr Kiattiphum said there is a need for more public awareness about the issue of suicide and how to handle it.

About 4,000 people took their own lives last year, he said.

Family and relationship problems were cited as the main reasons by those who left messages for their families.

According to psychiatrist Yongyuth Wongpiromsan, chief adviser to the department, the most common methods of suicide are by hanging, poison or firearm.

Factors leading to suicide were health issues such as depression, chronic illness (especially elderly people worried about becoming a burden), family problems such as domestic violence, and loss of self-control after bouts of excessive drinking, he said.