PHUKET: Long-term wear left a pontoon listing dangerously at Chalong Bay Marina, next to Chalong Pier, this week, leaving officials with the decision of whether to just patch it again, or spend up to B1 million replacing it.

tourismmarinetransportSafety
By The Phuket News Temporary repairs are being made while officials decide what to do with the repeatedly sinking pontoon. Photo: PPAO 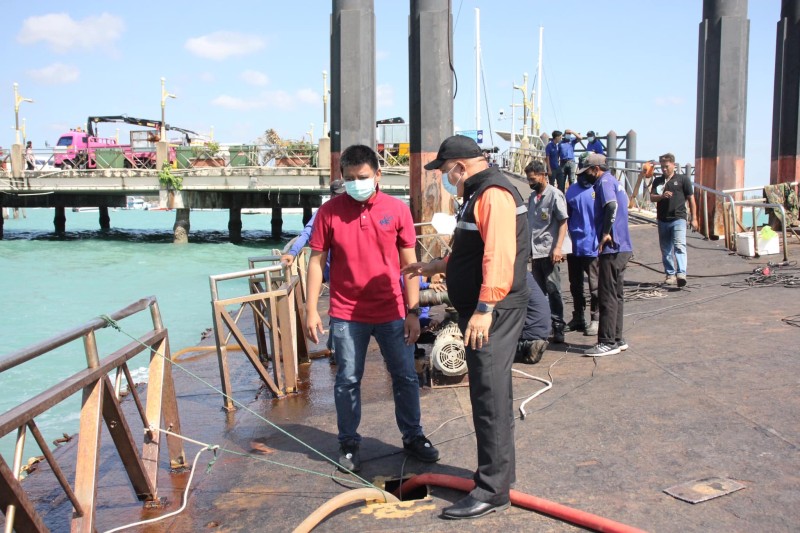 The pontoon began sinking on Thursday (Jan 13), leaving the platform that tourists use to board boats heading out to tour nearby islands leaning dangerously to one side.

The platform was closed, and engineers inspected the damage on Thursday, explained Tiwat Seedokbuab, Vice President of the Phuket Provincial Administration Organisation (PPAO, or OrBorJor), which is responsible for maintaining the tourist-busy Chalong Pier and Chalong Bay Marina.

The pontoon started taking in water through rust and abrasion after years of use, Mr Tiwat said.

“The technicians pumped out the water and placed a temporary patch over the leak. The pontoon is now back in its normal position, but it is still closed because it is still being fixed properly,” he said.

“It does not affect tourism because tourists can use other pontoons,” Mr Tiwat added.

“This pontoon is more than 20 years old and has had insufficient maintenance. It had previously sunk due to rust and the repeated contact by boats when mooring,” he explained.

Other pontoons used by tourists to board boats do suffer as much damage as this particular pontoon, Mr Tiwat noted.

However, the other pontoons will be checked for safety, he said.

Mr Tiwat led a meeting yesterday to discuss what to do with the pontoon, and any others found in disrepair.

“Technicians and all senior PPAO officials involved held a meeting about the budget required to address this issue. Depending on the action to be taken, it may cost anywhere from B100,000 up to B1mn,” he said.

“It is expected that the platform affected can be reopened by the end of this month. Now, its safety and usability are normal, but it has been in use for a long time, so we have to decide whether to just repair it again, or replace it entirely,” he said.

by the way, those who criticize and badmouth everything in thailand are always particularly funny, b...(Read More)

@ Kurt you are totally wrong there too. status as a diplomat remains until sri lanka invalidates the...(Read More)

poor sri lanka, also sucked dry by western corporations and with the help of politicians there, unti...(Read More)

How did the police figure the car got there? Who did the give a ticket to? Who did they ask for te...(Read More)

My how times have changed. A few years ago Thailand and the TAT didn't want such people to come ...(Read More)

C'mon. How can anyone expect police to actually do anything? ...(Read More)

Welcome to Thailand the land of the corruption probes faltering: what a shame!...(Read More)

Foreign tourists have all the time full opportunity to read/experience Thai clearing themselve on fo...(Read More)

Boy, another great example of what an extraordinary organization the RTP is. The level of detail in ...(Read More)