Singing the worthy praises of ‘Sing 2’

Singing the worthy praises of ‘Sing 2’

One of the most charming kids’ films to have surfaced over the past few years was ‘Sing’. With so much mindless family entertainment around these days it was nice to find a film that not only entertained but also taught valuable lessons and had a story that even adults could become engrossed in. Then of course there was the film’s originality and a soundtrack so great that even to this day kids at schools right across Australia ask for it to be played for them. 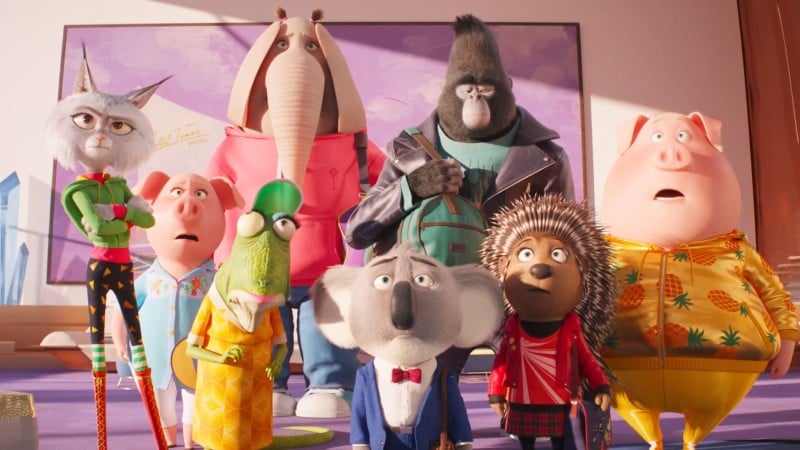 Buster Moon and his impressive cast are back. Image: IMDB

Of course the danger of the first film being so good was that perhaps the sequel couldn’t live up to expectations, but cast any worries about that aside because Sing 2 is equal to its predecessor in every single way.

This time around we find Buster Moon (voiced by Matthew McConaughy – Dallas Buyers Club) happy that his theatre is running successful shows that are gaining critical praise while showing off the talents of his cast and pleasing audiences. However, Buster soon realises that he wants more after a talent scout Suki (Chelsea Peretti – Parks & Recreation) tells him that his show and cast are not talented enough to take the next step and perform in the big city.

Soon Buster sneaks his crew into an audition for world-famous producer Jimmy Crystal (Bobby Cannavale – Ant-Man) who at first is not impressed by the audition but changes his mind when Gunter (Nick Kroll – Sausage Party) pitches the idea of a sci-fi spectacular which would feature reclusive star Clay Calloway (U2’s Bono). Crystal jumps at the idea but tells Buster he needs the show up and running in three weeks or he is going to throw him off the roof-top of a high rise.

Buster jumps straight into putting the show together but soon comes across issues. Johnny (Taron Egerton – The King’s Man) can’t dance, Rosita (Reese Witherspoon – Cruel Intentions) has a fear of heights, Meena (Tori Kelly – Sing) has no chemistry with her on-stage romantic leading man, Porsha Crystal (Halsey – If I Can’t Have Love I Want Power) joins the cast but can’t act, and Ash (Scarlett Johansson – The Avengers) has the hardest job of all – trying to convince Clay to come out of hiding and return to the stage.

There is just so much to love about Sing 2. First of all director/screenwriter Garth Jennings (The Hitchhiker’s Guide to the Galaxy) makes sure that no character here is left without anything to do. It almost feels like every character has their own short film that sees them overcoming the obstacle placed in front of them and somehow all of those storylines come together brilliantly to deliver something bigger. Nothing feels left out but also at the same time the film never feels crowded with too many plot-lines.

With Sing 2, Jennings also finds the right mix of genres as well. Like the original film in the franchise there are times when the film is deeply emotional and dramatic and then there are other times when Jennings gets a laugh from a great comedic line or a piece of slapstick. Jennings is a true creative genius as he seems to know when is the right time for each mood throughout the film and he never misses a beat.

Then there are the general ‘life lessons’ held within the film’s plot. Once again this franchise manages to bring a range of different lessons to the forefront without feeling like the film is trying to push an agenda onto its audience. Important lessons about never giving up on your dreams and overcoming your fears are explored in nicely presented ways while the film also features an important lesson about how sometimes those on top of the fame game are not always the nicest people to have to deal with. Once again the fact that all of that comes together in a film that is as entertaining as Sing 2 just goes to show what a talented filmmaker Gareth Jennings really is.

Sing 2 really is a fun ride for the entire family. Kids will be left in awe at the bright colours, action and kid-friendly storyline while adults will warm to the deeper messages that are hidden away under the surface. Then of course there is the amazing soundtrack, featuring new music by U2, which will have the whole family singing along. I don’t know how he does it but once again Gareth Jennings has delivered a well-rounded and entertaining family film that is guaranteed to become a favourite.

Sing 2 is currently screening in Phuket and is rated ‘G’.