The blue glowing jets of science fiction spacecraft came a step closer to reality on Wednesday (Nov 21) as US physicists unveiled the world’s first solid-state aeroplane powered in flight by supercharged air molecules. 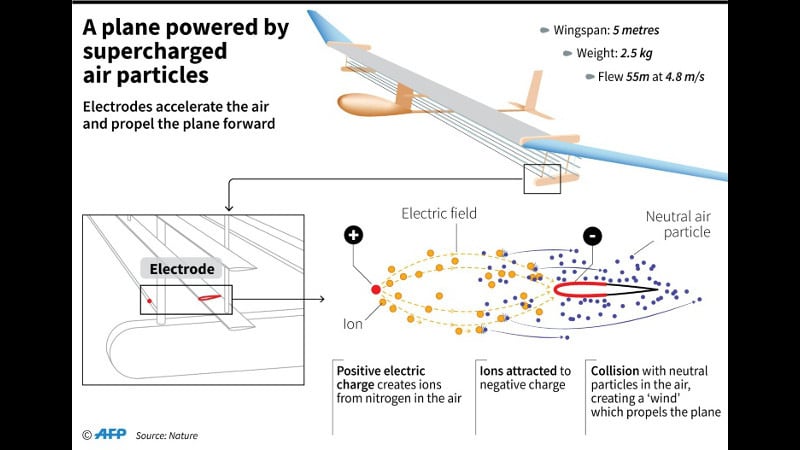 The news plane itself doesn’t look light years away from other renewable aircraft, such as the ‘Solar Impulse II’ (pictured) craft that in 2015-16 used energy from the Sun to fly around the world. Photo: Solar Impulse 2 / AFP / file / Bertrand Piccard Ever since Orville and Wilbur Wright’s momentous glide in the winter of 1903, aircraft have been driven by propellers or jets that must burn fuel to create the thrust and lift needed for sustained flight. Photo: AFP / file

More than a century on from the Wright brothers’ first artificial flight, scientists hailed the “historic” test of the new technology, which could eventually slash greenhouse-gas emissions from aviation.

Ever since Orville and Wilbur Wright’s momentous glide in the winter of 1903, aircraft have been driven by propellers or jets that must burn fuel to create the thrust and lift needed for sustained flight.

A team of experts from the Massachusetts Institute of Technology managed to unlock a process known as electroaerodynamics, previously never seen as a plausible way to power an aircraft.

They were able to fly the new plane, with a wingspan of five metres (16 feet), a distance of 55 metres at a speed of 4.8 metres per second.

That’s hardly supersonic, but the implications of this unprecedented mode of flight could be stratospheric.

“The future of flight shouldn’t be things like propellers and turbines,” said Steven Barrett, who designed the prototype.

“It should be more like what you see in Star Trek with a kind of blue glow and something that silently glides through the air.”

At first glance, the plane itself doesn’t look lightyears away from other renewable aircraft, such as the Solar Impulse II craft that in 2015-16 used energy from the Sun to fly around the world.

Unlike Solar Impulse, Barrett’s plane doesn’t have any propellers or solar panels – or any moving parts whatsoever.

Instead of engines, it is powered by a system comprising two main sections.

At the front of the plane sit a series of parallel electrodes made up of lightweight wires that produce an enormous voltage – +20,000v – supercharging the air around it and splitting away negatively charged nitrogen molecules known as ions.

At the plane’s rear are rows of aerofoils set to -20,000v. The ions automatically move from a positive to negative charge, dragging with them air particles that create the so-called “ionic wind” to provide the aircraft with lift.

‘Something we never knew possible’

The technology to create ionic wind has been around since the 1960s, but it was previously thought nowhere near efficient enough to prove useful to aeronautics.

The team not only showed that it was possible for ion-driven craft to fly but also – due to the relative lack of drag created by the electrodes – predicted that efficiency would increase in lockstep with speed, potentially opening the way for bigger, faster planes in future.

“It’s clearly very early days: but the team at MIT have done something we never previously knew was possible, in using accelerated ionised gas to propel an aircraft,” said Guy Gratton, aerospace engineer and visiting professor at Cranfield University, who was not involved in the study.

Barrett said he believed the current prototype could be scaled up “a significant amount” but cautioned that their may be a limit to how much propulsion the technique can produce.

“We don’t yet know if there is such a limit and we will certainly try to scale up as much as possible,” he said.

“I don’t yet know if you’ll see our vehicle carrying people any time soon but obviously I’d be very excited if that was the case.”

Barrett told AFP that the technology could be used on the skin of commercial aircraft, reducing drag and therefore the energy needed to power modern passenger jets.

“This would be much more efficient than the current situation where you have concentrated engines that generate thrust, which have to fight against a large passive airframe that generates drag,” he said.

In an editorial, the journal Nature, which published the study, said its success would encourage other sectors to re-visit technology that was long thought to be confined to sci-fi films.

It listed possible military applications including the development of silent drones and aircraft, and engines with no infrared signal and thus impossible to detect.

The prototype flight “will stimulate both awe and anxiety”, it said.

A 115 years ago, Nature published a short news item on the Wright brothers’ “first successful achievement of artificial flight.”

Barrett and the team noted a pleasing parallel with their revolutionary test and the one that sparked the aerial age: both flights lasted all of 12 seconds.