PHUKET: The series of food fairs across Phuket got further development with another Roi Rim Lay seafood festival which started in Saphan Hin yesterday (Mar 25) and is set to conclude tonight (Mar 26). 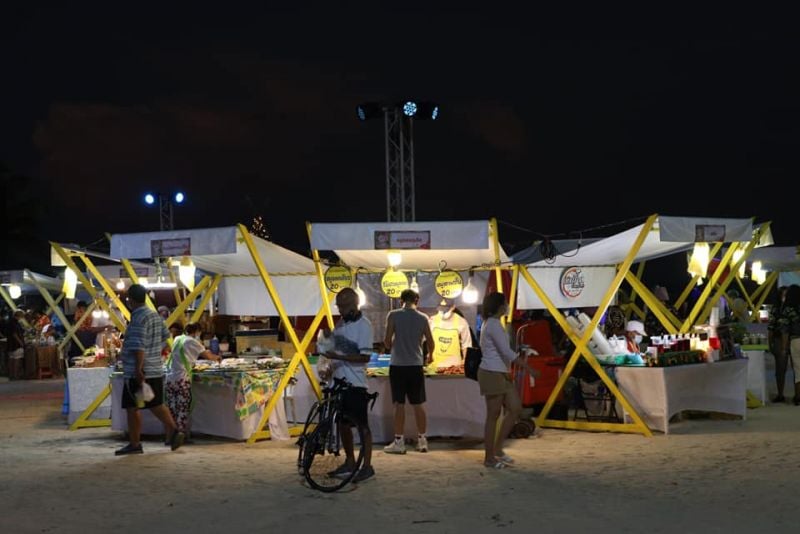 Just like previous Roi Rim Lay events, the current festival aims to provide local food vendors with an opportunity to earn some much-needed income while lifting the spirits of local residents and giving tourists a chance to feel the beat of Phuket lifestyle.

Speaking at the event, Mayor Saroj reiterated the great impact COVID-19 had on international tourism and therefore the need to stimulate local economy on its way to recovery. Farmers, fishermen, seafood producers, restaurant operators and entrepreneurs all rely on tourism in Phuket and need support amid this crisis. Thus participation in the fair is absolutely free for them. The biggest “must” is strictly adhering to the measures set by the Ministry of Public Health.

Mayor Saroj added that the second round of Roy Rim Lay in Saphan Hin is set to be held on Apr 23-24 to provide further support to entrepreneurs.

Speaking at Saphan Hin, Vice Gov Pichet reminded that Phuket is a world-famous tourist destination, known as the Pearl of Andaman. In 2019, before COVID-19 struck, the province welcomed 14.45 million tourists earning B442.89 billion. In 2020 the numbers dropped drastically – to 4mn visits and 108.46bn baht in revenue, a decrease of 72.54% and 75.51% respectively. The province started opening to foreigners as late as July 2021 but only to face two new shocks – “Omicron” and Russia’s invasion of Ukraine.

Earlier this week Nanthasiri Ronnasiri, Director of Tourism Authority of Thailand (TAT) Phuket office, announced that since the start of Phuket Sandbox program the island has received some 400,000 tourists spending B21bn. The re-launch of tourism lead to greater employment and business turnover at all levels resulting in B51bn circulating in Phuket economy, she stressed.

Yet Ms Nanthasiri didn’t recognise in her announcement that the initial growth in arrivals is no seen any longer. The Test & Go scheme was suspended in December while right after its resumption in February Russia invaded Ukraine leading to arrivals from most Eurpoean countries drop while visits from Russia (Phuket’s leading market during Sandbox) literally reduce to null.

According to the official ’Phuket Sandbox Daily reports’, the number of international arrivals at Phuket airport currently fluctuates around 2,000 a day. Numbers above this level – which used to be typical of January and February – are now recorded only on exceptionally good days. Ironically, Mar 26 was one of the later with 3,399 arrivals recorded.