PHUKET: Teerawat Thothip, a 27-year-old resident of Pa Khlok in Phuket has confessed to choking Swiss tourist Nicole Sauvain-Weiskopf with a headlock, but has denied intention to kill her and denied any attempt to rape her.

murderdeathcrimepolicetourismSafety
By The Phuket News 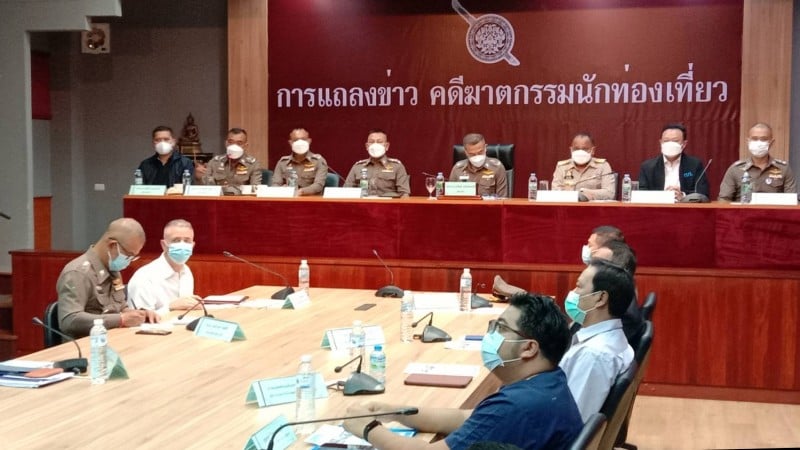 He just wanted her money and belongings, he told a press conference broadcast nationally today (Aug 8).

Teerawat was arrested by police yesterday for the murder of Ms Sauvain-Weisskopf, whose body was found near the Ao Yon Waterfall on Phuket’s east coast on Thursday (Aug 6).

Col Krissana Pattanacharoen, Deputy Spokesman of Royal Thai Police, today explained, “Police have managed to arrest a 27 year old man in connection with the death of a 57 year old Swiss female national who was earlier found dead at a waterfall in Wichit subdistrict, Phuket.

“During the course of investigation and interrogation, evidences were systematically collected and witness statements were taken. Phuket Provincial Court later issued an arrest warrant in connection with the evidence presented to the court.

“Police have charged the offender for murder and robbery causing death. The cause of death is yet to be confirmed as the autopsy report is yet to be released by the authority.

“An inquiry officer has applied to the Phuket Provincial Court to extend a detention period for further legal proceedings, Col Kirssana noted.

Speaking at the press conference this morning, Region 8 Police Deputy Commander Lt Col Nanthadet Yoinuan explained that police were first notified that Ms Sauvain-Weisskopf’s body had been found at 2pm that day.

Officers immediately responded to the call and arrived at the scene, he said.

Officers found Ms Sauvain-Weisskopf’s body face down in the stream. She was naked from the waist down and had been covered by a small tarpaulin weighed down by rocks. Her trainers and her shorts were found in the long grass nearby.

“On the first day, we went to examine the scene and make our plans for the investigation. On that day, I had no idea who the suspect could be,” he said.

“On the following day, the Police General-Commissioner [Pol Gen Suwat Jangyodsuk] brought a team of officers from the Crime Suppression Division (CSD), led by Maj Gen Jirabhop Bhuridej, to work together with local police.

“From the initial investigation on that day, we knew that the tourist stayed at a hotel in the Ao Yon area. On Aug 3, about 11:49am, she walked past a CCTV camera to the waterfall. The distance from her hotel to the waterfall is about 1.6 kilometres. The waterfall is not popular among tourists and is mostly  known only to local residents,” he added.

“We checked the footage from the CCTV camera nearest to the waterfall and found 34 vehicles passed the camera. We considered only eight vehicles as suspicious, and later only one last vehicle seemed suspicious. The rider arrived about 12 minutes before the deceased arrived and the suspect drove the motorcycle back from the scene about three hours later. The rider was Teerawat Thothip, who was a local resident of the Cape Panwa community,” he said. [Of note, Teerawat’s registered address is in Pa Khlok, Phuket]

“We investigated until we found him at his house. We took him to Wichit Police Station for questioning. At first, he did not give good cooperation and gave confusing statements. Then we asked him to take off his shirt and we saw a big scratch along the right side of his body. The scratch had only just scabbed,” Lt Col Nanthadet continued.

“With much evidence and a long time in questioning, he eventually cried and confessed that he had killed the tourist,” Lt Col Nanthadet said.

Teerawat himself joined the press conference by phone.

“I, Teerawat Thothip, am sitting with my girlfriend, uncle and lawyer. I would like to explain about the incident on Aug 3. About 10-11am, I rode my motorbike to Ao Yon Waterfall to find orchids and other things in the forest.

“I walked up to the highest level of the waterfall, but found nothing I wanted. Then I walked down and saw the foreigner, who was naked from the waist down, sitting beside the waterfall. There was a black backpack near her which I expected must have had valuable items inside,” Teerawat said.

“Then I opened her backpack and found B300 in cash. I put the money into my wallet and threw her trainers away from the area. I walked down and rode my motorbike to a shack of Bang Lit [a friend],” Teerawat continued.

“On the way to the shack, I spent the stolen money on a bottle of soft drink and ice. Then I met my friends at the shack and used the money to buy marijuana and cigarettes.

“After that, I returned home and lived normally until Aug 5, when my girlfriend told me that the body of a foreigner was found at the waterfall. I was shocked and felt guilty for everything I had done. Then I confessed to the police.

“I would like to say sorry to every person in Thailand and the family of the tourist for what I had done. I’m sorry. Really sorry,” Teerawat said.

Asked whether he told anyone after knowing the news about Ms Sauvain-Weisskopf’s body being found, Teerawat replied, “I was shocked and did not tell anything to other people. I waited until the police checked the CCTV camera and tracked me to my house. I was sleeping when the team of police came to my house.”

Asked whether he was drunk or under the effects of any drugs while committing the killing and whether he really wanted to only steal her belongings, he said, “I was not drunk at that time, but I took drugs one week before. I really just wanted her belongings.”

Asked why he hd attacked Ms Sauvain-Weisskopf, Teerawat replied, “I have been unemployed because of the COVID-19 pandemic. I am normally hired for cutting grass. I had a very low income, like B1,000 per week. I gave the whole money to my girlfriend and family, so that they can spend it for living and rising my child.”

Asked whether he thought that his actions would have led to her dying, he said, “I did not mean to kill her.”

Asked whether he wanted to say anything to the Ms Sauvain-Weisskopf’s amily, he replied, “I would like to say sorry to the family for what I did. I am begging for forgiveness from every person in Thailand. I feel very guilty for what I have done.”

Asked about the long scratch on his torso, Teerawat explained, “I already had the scratch from before the killing, but I got more scratches from the fighting.”

At the press conference it was explained that Teerawat was arrested for drugs possession on  Oct 5 last year. He was sentenced to nine months’ imprisonment and fined B15,000 baht, but was placed on two years probation.

Speaking in English at the press conference, which was also attended by Phuket Governor Narong Woonciew and Tourism Authority of Thailand (TAT) Governor Yuthasak Supasorn, national police chief Gen Suwat Jangyodsuk said, “On behalf of the Royal Thai Police, I would like to offer our deep condolences to the family of the victim who lost her life in this tragedy.

“All of us felt the same as the family of the victim in this difficult time. I know that nothing could ever compensate [for] this loss, although police managed to arrest the murderer soon after we opened an investigation,” he said.

“We can assure that the offender will be charged and tried fairly in the court of law in due course. It is our job to ensure that justice is rendered so that we will gain the public’s confidence.

“As a Thai, we, ourselves, will take this opportunity to welcome tourists to visit Thailand, and we will do our best to protect you, to provide public safety, and to be your first friend during your stay here in Phuket and all across the country of Thailand,” Gen Suwat concluded.

Also present today was Jan Dirk Kaethner, Police Attache of the Embassy of Switzerland in Bangkok.

“I would like to thank General-Commissioner Suwat and my colleagues of the Royal Thai Police for the huge effort they are putting in the investigation of this terrible murder case,” Mr Kaethner said.

“The victim, the family of the victim and all the people of Thailand deserve a professional and swift investigation of this crime. I’m very confident that the hard work of the Royal Thai Police under the leadership of Gen Suwat will lead the investigation to success.

“Gen Suwat brought his best team, his best officers, and I know from my experience this is a guarantee for success. I would also like to thank the government and authorities of Thailand for their big effort to make the beautiful Phuket safe again. Thank you very much,” he added.

The B200,000 reward offered by local tourism businesses for catching Ms Sauvain-Weisskopf’s killer was today received by the police officers who conducted the investigation. The officers also received bouquets of flowers in gratitude for their efforts.