PHUKET: A Russian tourist exhausted after she was pulled away from the beach by a dangerous rip current was rescued and brought safely back to shore at Nai Harn beach yesterday (June 28).

tourismmarineRussianSafety
By The Phuket News 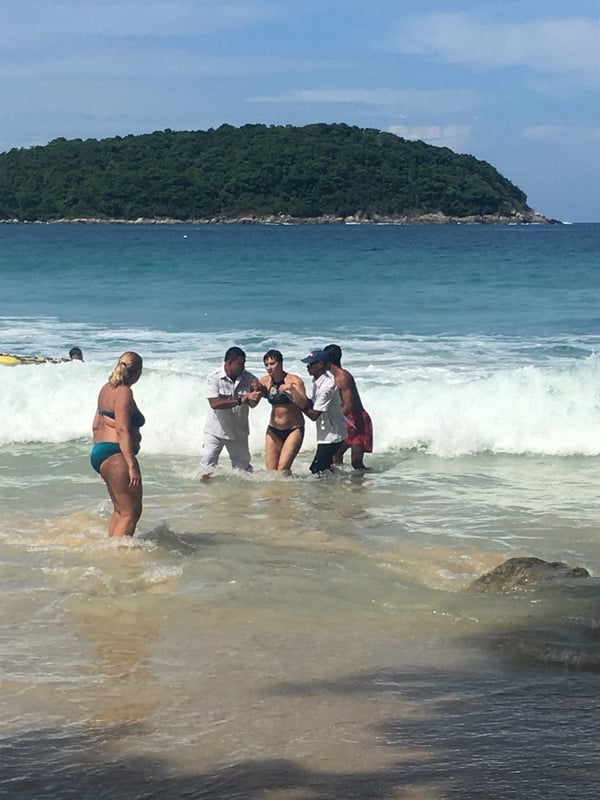 The rescue, by lifeguards with the aid of a local surfer, came as the southwest monsoon weather continues to create strong waves and dangerous “flash rips” along the major tourist beaches on Phuket’s west coast.

Rawai Mayor Aroon Solos reported that the woman was a guest at the nearby All Season Hotel in Nai Harn, but was rescued from a dangerous rip at the southern end of the beach some 400 metres away.

The rescue came while a 23-year-old Chinese tourist drowned at Karon Beach yesterday afternoon after going into the sea despite red flags being placed along the beach.

The two lifeguards stationed at the beach warned the tourists against swimming in the area three or four times but the tourists ignored the warnings.

At the same time, another group of tourists also entered the water and one of the group got caught in the rip currents and the rest of the group were calling for help.

Due to the low number of lifeguards stationed at the beach they were unable to deal with the two groups at the same time, they said. (See story here.)

Daren Jenner, the International Marine Safety Officer, Thailand Section Chief, for the International Surf Lifesaving Association (ISLA), told The Phuket News yesterday, “The drowning at Karon Beach today was right on cue with the arrival of Phuket's rip currents. The full moon creates large tidal swings. On the outgoing tide, the speed and power of these rip currents increase.

“Look for the danger to continue for at least the next few days, especially at Kata, Karon, Surin, Bang Tao, Layan, and Mai Khao. Swimmers should use extreme caution at all Phuket beaches,” he said.