Russian national arrested at Phuket Airport, at US Govt request

Russian national arrested at Phuket Airport, at US Govt request

PHUKET: A Russian man was arrested while waiting to board a flight at Phuket International Airport yesterday (Nov 29) following a request from the US Government.

Russianimmigration
By The Phuket News 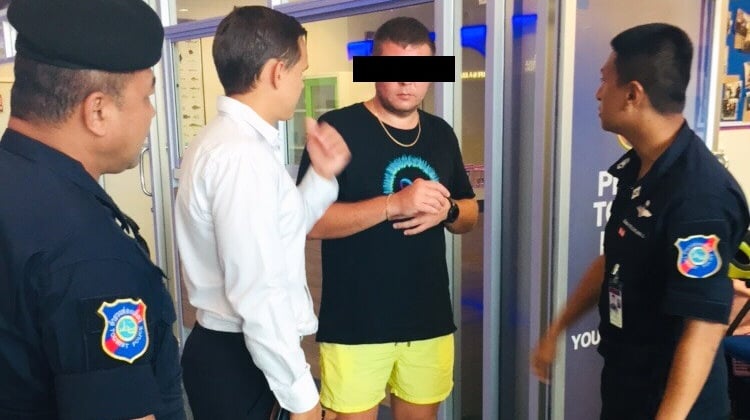 Russian national Anton Bogdanov, 33, was arrested at Phuket International Airport at the request of the US Government. No reason for the arrest has been made public. Photo: Supplied

“I had received a notice from the Phuket Tourist Police to arrest Mr Bogdanov. He was in Phuket on holiday. He has been taken into custody and is now undergoing ‘legal processing’ (sic),” Col Supachok said.

“He (Bogdanov) is wanted by the United States Government, and the Royal Thai Police are responding to their request,” he said.

“Phuket Tourist Police found him with his partner in front of the departures gate. They were waiting to board a flight to his (home) country that afternoon,” Col Supachok explained.

However, no reason has been provided to explain why Mr Bogdanov was taken into custody or what crimes he has allegedly committed in the US.

“I can’t inform anything about the arrest in detail, but his partner has already been taken to the Crime Suppression Division headquarters in Bangkok. That’s all I can say,” Col Supachok noted.

The news of the international arrest broke late yesterday when the Russian Embassy in Thailand reported the detention of Anton Bogdanov, a Russian citizen, at Phuket International Airport. (See story by Novesti Phuketa here)

Russian news service RIA Novosti quotes Vladimir Pronin, Head of Consular Section at the Russian Embassy in Bangkok, as saying, “This Russian national was arrested upon arrival to Phuket island, where he came on vacation with his wife.

“Bogdanov was allowed to notify the Embassy and he informed me by phone that the arrest was conducted by Thai police, though an employee of US FBI was present.”