PHUKET: A Latvian** man faces serious charges which may incur years in jail for a drunk-driving accident in Rawai last night (Sept 12) that left a local woman in hospital with head injuries. 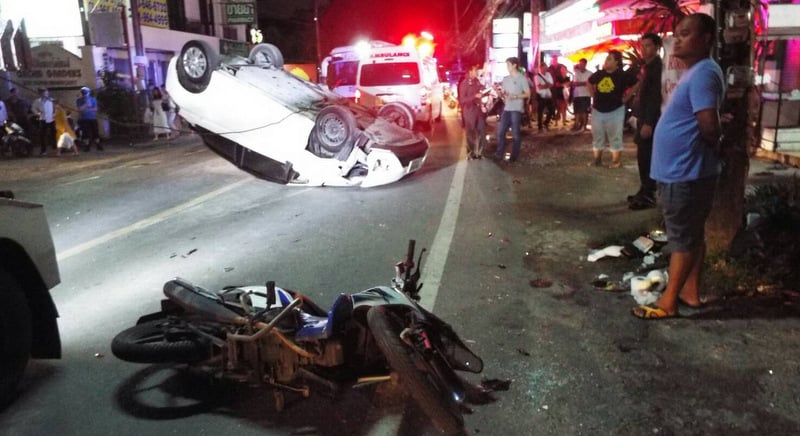 Latvian national Julian Ranmer finally takes a breath test at Chalong Police Station after initially refusing to take the test at the scene of the accident. Photo: Eakkapop Thongtub Latvian national Julian Ranmer, 35, as named by police, was charged for drunk driving after he initially refused to take a breath test after he rolled his car on the main road through Saiyuan last night.

Lt Sakkarin Sangjaroen of the Chalong Police together with rescue workers arrived at the scene, in front of the 7-Eleven store on Saiyuan Rd, at 8:30pm.

At the scene officers found a white Honda Jazz overturned in the middle of the road, with a damaged white Honda Wave motorbike lying just metres away.

The motorbike driver, Ampa Hnuon, 36, had suffered head injures and was taken to Vachira Phuket Hospital.

A white Mazda CX5 sedan parked beside the road was also damaged.

“Mr Ranmer was driving at high speed and lost control of the vehicle, which struck the Mazda CX5 sedan parked beside the road,” Lt Sakkarin explained.

“After that, Mr Ranmer’s Honda Jazz rolled two times and collided with the motorbike, which was coming from the opposite direction,” he added.

“We asked Mr Ranmer to take a breath test, but he refused to cooperate. Instead he just kept talking in circles,” Lt Sakkarin noted.

“Finally he took the breath test and tested positive. At this stage we have charged him with drunk driving only. However, that charge may be increased, depending on Ms Ampa’s condition,” Lt Sakkarin said.

“We are waiting for doctors to confirm her status,” he added.

However, the more grievous charge of drunk driving causing serious injury to others may incur two to six years imprisonment or a fine of B40,000 to B120,000 or both, and driver’s license suspended for up to two years.

Drunk driving causing death may incur three to 10 years imprisonment and a fine of B60,000 to B200,000 and the driver’s license will be revoked. (See details here.)