‘Rung’ released on bail after 59 days

‘Rung’ released on bail after 59 days

THAILAND: The Criminal Court has approved bail for the temporary release of Rassadon co-leader Panusaya “Rung” Sithijirawattanakul on condition that she must not get involved in activities deemed to dishonour the monarchy. 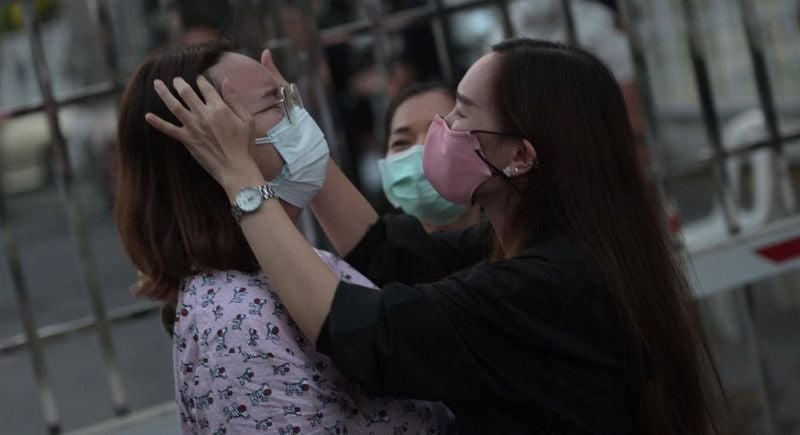 Panusaya ‘Rung’ Sithijirawattanakul (left) is greeted by her sister after she was released from the Central Women’s Correctional Institution yesterday. Photo: iLaw.

After an inquiry into her bail request yesterday morning (May 6), the court first scheduled handing down the decision at 3pm but later resecheduled it twice to 4pm and 5pm.

Ms Panusaya’s mother put up a bond of B200,000 and acted as her guarantor.

The court set a few conditions for her release. She must not act in the same manner that she had been charged with, which tarnishes the monarchy.

As well, she must not join any activity that may cause unrest in the country, leave the country without permission and must report to the court as scheduled.

The statement was prepared by the United Front of Thammasat and Demonstration to which she belongs. It later became a core group under the Rassadon umbrella, which demands changes ranging from the resignation of the prime minister, a new constitution and monarchy reform.

She subsequently led several youth rallies and was arrested on multiple charges, including sedition and royal defamation.

On March 8, she was arrested and the court had until now denied her bail.

While in jail, she joined her friend Parit “Penguin” Chiwarak in a hunger strike demanding bail for all political detainees.

As of yesterday, Ms Panusaya was detained for 59 days and on hunger strike for 38 days.

On April 29, Thammasat students elected Dome Revolution, a party led by her, to their Student Council. All parties contesting in the election were progressive.

Earlier on April 23, two key activists - Somyot Prueksakasemsuk and Jatupat “Pai” Boontararaksa were also released on bail after they agreed to the same conditions.