PHUKET: Teachers from 26 schools in Phuket have signed up to take part in a road-safety campaign hoping to get teachers to lead by example and get vital road safety messages through to students. 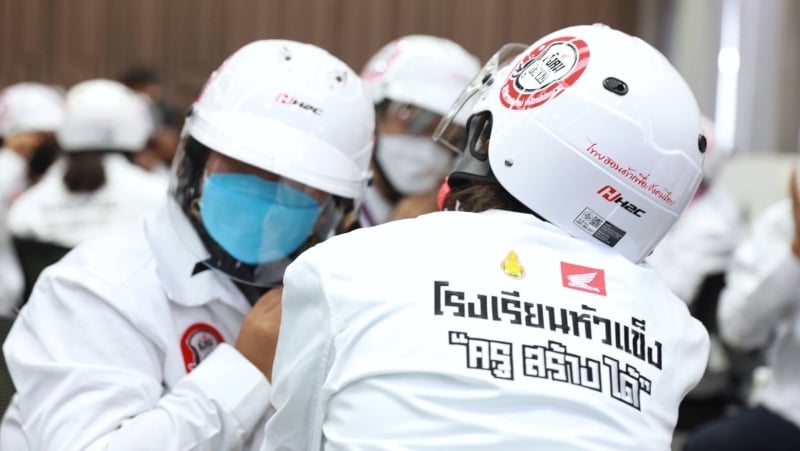 The campaign activity was held on the same day that an Senate Education subcommittee was in Phuket to be briefed on road-safety initiatives across the island. Photo: PR Phuket The campaign activity was held on the same day that an Senate Education subcommittee was in Phuket to be briefed on road-safety initiatives across the island. Photo: PR Phuket

Using terms such as “hard headed” and “stubborn society”, the "Teachers Can Build" campaign recognises the critical issue that has undermined road safety campaigns for decades.

The campaign in Phuket is part of a nationwide campaign organised by Honda Thailand and  Office of the Basic Education Commission (OBEC).

Identical campaigns are being coordinated through four Honda Safe Driving Training Centers, including in Phuket. The other three are in Bangkok, Samut Prakan and Chiang Mai. More than 120 schools are taking part in the campaign.

The road-safety event came on the same day that a Senate Education Subcommittee arrived in Phuket to be briefed on the guidelines for preventing and reducing road accidents being rolled out across the island.

Joining the briefing, held at the offices of PKCD Co Ltd, a consortium of Phuket-based businesses working closely with the government to implement national policies, was Phuket Vice Governor Anupap Rodkwan Yodrabam.

The Senate subcommittee was told that the number of road-accident injuries and fatalities in Phuket in 2021 showed a decrease of 90, accounting for 21.60 per 100,000 people, “which is a significant reduction”, said a report by the Phuket office of the Public Relations Department (PR Phuket).

“This was caused by the cooperation of network partners and the Road Safety Operations Center at all levels to improve the risk points, especially crossings, and when there is a major accident or an accident where people have died, there will be a team at the scene of the accident to analyze the elements that causes the accident,” PR Phuket reported.

“Phuket Province as a model Smart City has applied AI technology to city management to create safety in various dimensions,” the agency added.

The centre uses a City Data Platform (CDP) jointly developed by City Data Analytics, the Phuket branch of the Digital Economy Promotion Agency (Depa) and the Prince of Songkla University.