THAILAND: Some rich provincial administration organisations (PAO) are seeking an alternative COVID-19 vaccine from the Chulabhorn Royal Academy (CRA) amid continuing uncertainty over the government’s ability to distribute vaccines as planned. 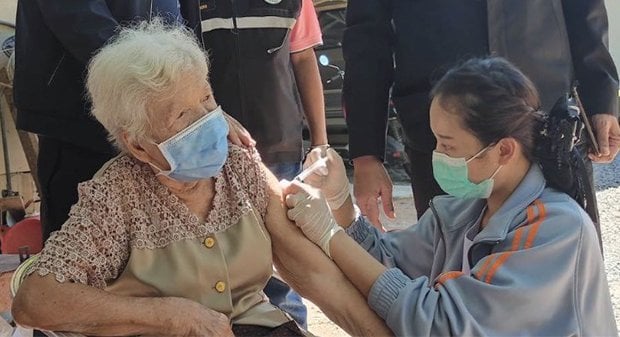 A health worker inoculates an elderly woman with COVID-19 vaccine on Koh Samui on Saturday (May 29), when the island kicked off a vaccination campaign for people aged 60 years or more. Photo: Supapong Chaolan.

PAOs in Nakhon Ratchasima and Surat Thani are among the provincial governments intending to use money from their own budgets to acquire vaccines, instead of waiting for the government rollout to arrive.

On May 25, Nakhon Ratchasima governor Wichen Chantharanothai sent a letter to CRA secretary-general Nithi Mahanonda supporting the provincial PAO’s intention purchase 100,000 doses of the Sinopharm vaccine from the institute.

On the same date he sent a letter to Local Administration Department director-general Prayoon Rattanaseni, seeking permission for the Nakhon Ratchasima PAO to buy vaccines because “the agencies responsible for vaccine distribution are unable to give the province any assurance about additional doses of the vaccine and a date for delivery”.

The northeastern province has a 2.7 million population and plans to inoculate 70% of the inhabitants, or 1.9 million people, before it hosts the men’s and women’s Asian volleyball championship tournaments from August to September.

Both are expected to draw visitors the province.

So far Nakhon Ratchasima has vaccinated only 89,000 people, or less than 5%, which is far behind the target.

The letters from the governor were sent in the final days of his tenure. Today (May 31) he began a new job as governor of Chaiyaphum, a much smaller province. His transfer has attracted criticism from Nakhon Rathchasima residents, who see it as unfair.

Nakhon Ratchasima PAO chairwoman Yolada Wangsupakitkosol confirmed today that the organisation was ready to use its own funds to buy the vaccine from the CRA, and dispense it for free.

Pongsak Jakaew, chairman of the Surat Thani PAO, said yesterday the organisation planned to set up a fund of B100 million to purchase Sinopharm from the same academy, and he expected no obstacles in raising the money.

He said free jabs would be available for the needy. Wealthier people in the province would be charged half price or full price for the vaccine, if it was allowed to buy Sinopharm from the academy.

Their moves came after the CRA was allowed to import a million doses of Sinopharm, with the price not exceeding B1,000 per shot.

The only stumbling block is the order by the Local Administration Department issued on Feb 8 that bans all local administration organisations from purchasing vaccines on their own “in the first stage” of the pandemic.

Only the government was allowed to buy and administer vaccines, the order said.

All local government organisations are under the department.

Interior Minister Anupong Paojinda on Monday indicated that their purchasing plan would not be easily achieved, and the final call would rest with the Centre for COVID-19 Situation Administration.

A key issue to discuss was the interpretation of “the first stage” stipulated in the department’s announcement, and whether or not the outbreak had passed beyond that stage, the minister told the Channel 3 news programme.