Ricciardo aiming for McLaren podium as Norris warns of pressure

Ricciardo aiming for McLaren podium as Norris warns of pressure

FORMULA ONE: McLaren are aiming to “close the gap” to Mercedes when the new Formula One season begins with new driver Daniel Ricciardo looking to get back on the podium, the team announced at its 2021 presentation yesterday (Feb 15). 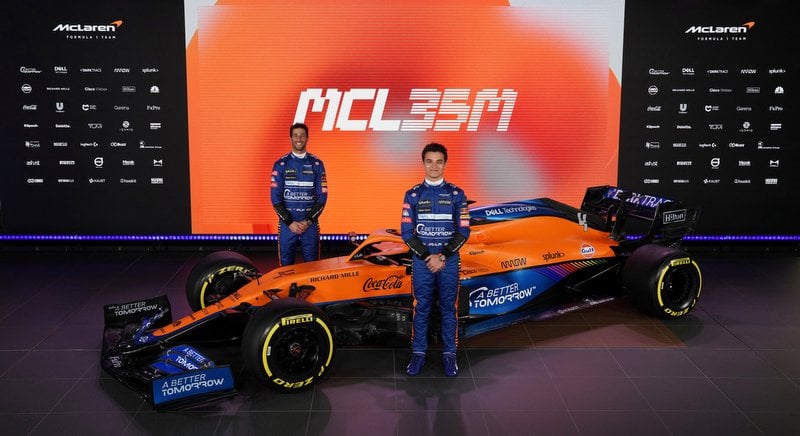 The Australian, 31, who has joined the outfit from Renault, will line up alongside 21-year-old Briton Lando Norris who scored a third-placed finish in last season’s Austrian Grand Prix which helped McLaren to finish third in the constructors’ championship.

“As I see it, most teams have a chance for a podium,” said Ricciardo at the digital launch.

“Hopefully my experience and my motivation come out on top in whatever battle I am in. I certainly have ambition to be on the podium.

“McLaren has been on an awesome journey over the last few years, and I’m looking forward to helping the team maintain this positive momentum.”

Norris finished ninth in the 2020 drivers’ championship but his preparations for the new season were hampered in January by a spell of quarantine in Dubai after testing positive for COVID-19.

“I felt drained, tired for a couple of weeks, but I am now fully recovered,” he said. “I am altogether confident I can come into the season knowing what I really want.”

McLaren, entering their 54th season in Formula One, finished last season well behind Mercedes, the seven-time defending champions for drivers’ and constructors’ championships, but hope that their new engines, supplied by Mercedes, will help them to fight for the titles.

“We are striving to close the gap to Mercedes who we anticipate will again be fastest,” said McLaren CEO Zach Brown.

“Technical regulations remain stable so we expect to be the same as last year and even closer next year.”

The switch from the Renault engines, which they used for three years, to Mercedes came in a bid to add to their 20 world championships – 12 drivers’ titles and eight constructors’ championships.

“The Mercedes power unit can help us win races again but we still have work to do as a team before we fight for race wins again.”

Apart from the engine and new driver line-up, McLaren also unveiled the MCL35M, the team’s 2021 race car, which is an “evolution” of the 2020 model and “benefits from aerodynamic and chassis developments” that the team implemented during the off-season.

The team said the new car would maintain the “iconic McLaren papaya orange and blue”, first carried by the team in the 1960s with team founder, Bruce McLaren, at the wheel.

Meanwhile Norris warned his new team-mate Ricciardo he will be under pressure to deliver this season.

In his opening two seasons, Norris was evenly matched with team-mate Carlos Sainz.

Following the Spaniard’s switch to Ferrari in place of four-time world champion Sebastian Vettel, the 21-year-old believes he can keep up with Ricciardo.

“I don’t think the arrival of Daniel will make it any harder for me,” said Norris.

“I worked with Carlos who is an extremely good driver and there are things Carlos is going to be better at than Daniel and vice-versa.

“I don’t believe Daniel is a big step above anything that Carlos has achieved, and there is more pressure on him because he has been in Formula One for longer and he has to come in and perform very well.

“I am in that earlier phase of my career but I still need to perform very well, and there are no excuses for me anymore.”

‘Fitting into the puzzle’

Ricciardo is keen to get back on track after recording just two top-three finishes at Renault following his surprise decision to quit Red Bull.

“I feel like this team has a bunch of momentum and there is good stability,” he said.

“When I first talked to McLaren in 2018 there were still quite a few moving parts. The results were not there on track, and they were trying to figure out their own structure.

“They have established that now and I am fitting into the puzzle as opposed to putting it all together.”

Norris helped McLaren to third in last season’s constructors’ championship, their best result since Lewis Hamilton left for Mercedes at the end of 2012.

He became the youngest British driver to finish on the podium after taking third at the opening round in Austria last year.

Now he wants to establish himself as McLaren’s number one driver, regardless of Ricciardo’s arrival.

“I have more responsibility on me now than the past few years to lead the team,” Norris said.

“It is a big opportunity for me to take up that lead and I will work very hard on doing that.”