PARALYMPICS: The first group of paralympians representing Thailand at the Tokyo 2020 Paralympic Games landed in Phuket earlier this morning (Sept 1) and will remain here in quarantine for the next 14 days. 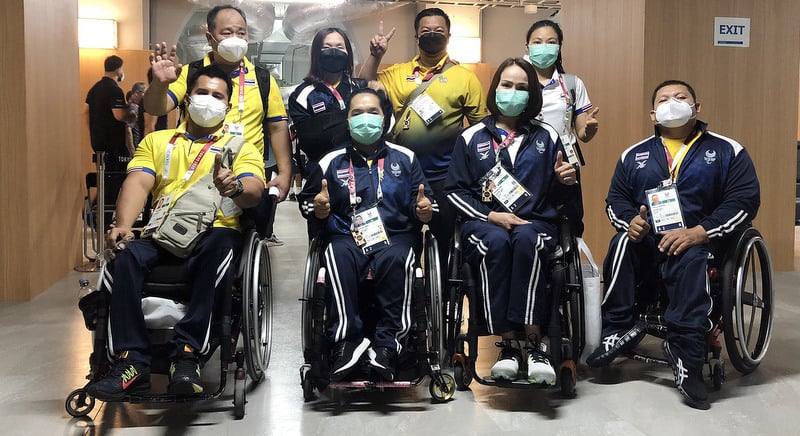 The paralympic athletes, staff and coaches arrive at Phuket airport. They will remain here in quarantine for 14-days under the Phuket Sandbox scheme. Photo: MCOT

The delegation of athletes, staff and coaches was led by Saysunee Jana who won Thailand’s first medal at the Games when she claimed bronze in the in the women’s epee individual category B event wheelchair fencing last Thursday (Aug 26).

The Thai star defeated China’s Zhou Jingjing 15-8 in the bronze medal match on the second day of competition at the COVID-delayed biennial tournament.

Despite her achievement, the Chiang Mai native apologised to the Thai fans for her failure to win gold.

“I’d like to thank all Thais for your moral support,” she said. “I’m sorry that I could not reach my target of winning gold. I did my best.”

The 47-year-old said she was looking forward to the next Games in Paris in 2024.

“I want to go to Paris and I will work harder,” said Saysunee.

She will receive a B3 million bonus from the National Sports Development Fund for her medal success in Tokyo. She won gold medals at the 2004 and 2012 Games and took silver in Rio five years ago.

All athletes, staff and coaches will remain in Phuket under the Phuket Sandbox program and be eligible to leave after their mandatory 14-day quarantine period has passed.