Remembering King Bhumibol: The father of the land

Remembering King Bhumibol: The father of the land

Throughout his 70 years on the throne, the late King Bhumibol Adulyadej devoted himself to the development of Thailand in many areas. The sight of King Bhumibol in the countryside, with a camera around his neck and holding a map, was familiar to all Thais. 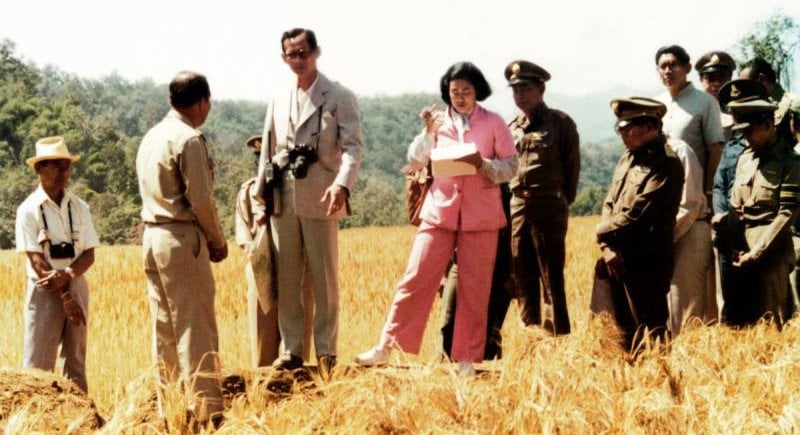 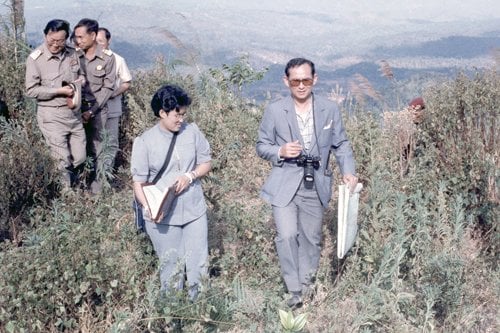 King Bhumibol was deeply involved in the development of Thailand’s agricultural industry, energy industry and water management systems as a means of improving the people’s living conditions. Here we will look at just some of the many aspects of the late King’s tireless dedication to improving the lives of his subjects.

The late King Bhumibol Adulyadej invented many devices with appropriate technology to improve the people’s living conditions and the environment. He became the world’s first monarch to apply for, and be granted, a patent for his own invention.

The Cabinet on November 21, 2006, approved a proposal by the National Research Council of Thailand to present King Bhumibol with the title “Father of Thai Invention”. The decision was meant to honour King Bhumibol and encourage Thai people to follow in his footsteps. It was also intended to urge young people to create social capital in terms of inventions and to promote cooperation among inventors.

The late King’s first patent was granted on February 2, 1993, for his invention, which is referred to as “Chaipattana Aerator, Model RX-2”. The Chaipattana Aerator is a paddle-wheel machine in the form of a floating buoy that helps add oxygen to water. It was awarded first prize by the National Research Council of Thailand in July 1993.

Eight years later, in 2001, a second patent was presented to him in 2001 for another aerator, referred to as “Chaipattana Aerator, Model RX 5C”. This invention is a prototype of a mechanical oxidation device for use in water treatment. King Bhumibol’s inventions helped save the country’s foreign currency in imports of wastewater treatment equipment as well.

Director-General of the Department Praphon Wongtharua said that the Alternative Energy Development Plan, 2015-2036, focuses on encouraging the maximum use of alternative energy in order to reduce oil imports. Power generation from biomass is part of the plan, and it has been carried out in all parts of the country.

King Bhumibol’s Royal Initiative on alternative energy development dates back more than three decades. At that time, crude oil prices increased sharply, causing many countries to turn to alternative fuels as a solution.

In 1979 King Bhumibol instructed the Royal Chitralada Project to embark on experimentation with biogas production from dairy cow manure and dead plants, which were fermented for a period of time. The process created a mixture of gases, which were usable as fuel, and represented not only a viable utilisation of surplus materials, but also an alternative to fossil fuels.

After his observation of the biogas production experiment, King Bhumibol in 1985 entrusted officials with undertaking a study on ethyl alcohol or ethanol production from sugarcane to cope with possible oil shortages in the future. The study showed that the transformation of sugarcane into ethanol as an alternative energy source was viable. Then King Bhumibol offered a fund for the construction of facilities and equipment for further research into ethanol production from sugarcane.

King Bhumibol found that palm oil could be used as an alternative to diesel and his formula was tested and introduced. His initiative led the public and private sectors to further develop biofuel into commercially viable products, especially ethanol and biodiesel.

Recognised as the “Father of Energy Development in Thailand”, King Bhumibol not only proposed ideas but also put them into practice. He made use of leftover materials as well. For instance, rice husks from rice mills were turned into charcoal as a form of fuel. Cow dung from his cattle pens at Chitralada Villa was used to produce biogas to generate power for factories there.

King Bhumibols innovation on biodiesel from the extraction of palm oil won the Gold Medal with mention from Brussels Eureka 2001 in Belgium. Inspired by King Bhumibol’s initiative to develop alternative fuels to replace imported fossil fuels the Government has encouraged various communities to produce biodiesel for their own use to reduce energy costs.

Literally meaning “monkey cheek,” kaem ling is a well-known flood-control project initiated by the late King Bhumibol, who observed that most monkeys, when they obtain bananas, usually store them in their cheeks. They would chew and swallow them later as needed.

King Bhumibol believed that reservoirs built on both sides of the Chao Phraya River, which flows through Bangkok to the sea, could hold excess floodwater in the monsoon and release them into the sea at low tide. He suggested that the Royal Irrigation Department construct large water retention reservoirs near the coast to store water.

New water gates were also constructed to release water into the sea during low tide and closed during high tide to prevent seawater from flooding reservoirs and the surrounding areas. The kaem ling project proved its ability to hold excess water to help alleviate drought.

King Bhumibol, who was honoured as the Father of Water Resource Management, was long involved in water resource development and management. Since his accession to the throne in 1946, he worked to improve the standards of living of the Thai people, particularly farmers, whose lives depend greatly on having adequate supplies of water for their farming.

King Bhumibol initiated many projects to develop water resources for agricultural and other purposes. The water issue forms part of Thailand’s national agenda, and the royal holistic approach is emphasised in the country’s integrated water resource management for sustainability.

The late King Bhumibol Adulyadej has been honoured as the “Father of Thai Rice Research and Development” for his great contribution to research and development, which led to food security and economic, social, and cultural stability.

The Cabinet, during its meeting in October 2016, approved the proposal submitted by the Ministry of Agriculture and Cooperatives to honour two kings of the Royal House of Chakri: King Chulalongkorn (Rama V) and King Bhumibol Adulyadej (Rama IX).

According to the proposal, King Chulalongkorn, who was the grandfather of King Bhumibol, has been honoured with the title “Father of Thai Rice Reform”. He initiated the reform of rice production and development, which greatly benefited rice cultivation and trade in Thailand.

During his reign from 1868 to 1910, King Chulalongkorn introduced comprehensive and progressive reforms. He established the Ministry of Agriculture to support rice production and improve the quality of rice and rice trade. The King laid the foundation for a modern irrigation system and introduced the use of rice farming machines on a trial basis.

His abolishment of slavery resulted in an increase in a workforce for rice production. The King established an agriculture school to produce personnel for various divisions of the Ministry of Agriculture. He also provided scholarships to enable students to study overseas in various agricultural fields.

As for King Bhumibol, he initiated rice research and development in various royally initiated projects. He suggested the re-introduction of the annual Royal Cultivating Ceremony and the Royal Ploughing Ceremony to boost the morale of Thai farmers.

Rice was one of the first agricultural crops studied at Chitralada Villa to find the best cultivation methods to recommend to farm communities. King Bhumibol requested that different strains of seed be gathered from all over Thailand for testing. He gave support to the Thai Rice Foundation and the International Rice Research Institute and also offered a fund to the Department of Rice each year for rice research.

King Bhumibol travelled to all corners of the country to visit farmers and provide them with assistance. The royal policy was to sustain the occupation of rice farming as Thailand’s cultural heritage and its wisdom and as the foundation of the country’s sustainable development.