The Soi Dog calendar marked an important day Thursday (Feb 13). We know it as International Gill Dalley Remembrance Day. This year will mark three years since we lost our inspiring co-founder, Gill Dalley, who dedicated much of her life to ending the suffering for homeless animals in Asia. 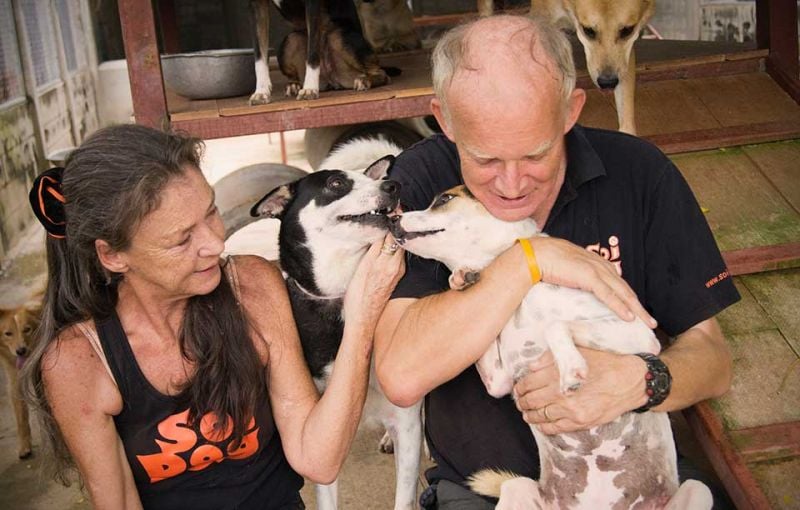 Gill and John in a loving moment. She will always be remembered.

Three years ago on February 13th of 2017, this heroic woman passed away after a short battle with cancer.

Gill was the lifeblood of Soi Dog, and her legacy will never be forgotten. Gill’s is a story of both loss and hope.

Back in 2003, Gill and her husband, John, retired to Phuket. It wasn’t long before they became exasperated by the plight of homeless animals in Thailand. With estimated 70,000-plus street dogs and cats on the island of Phuket alone at that time, they could not sit idly by while voiceless animals suffered in silence.

Gill and John joined forces with a fellow expatriate from the Netherlands. With the help of just a few volunteer vets and occasional nurses, they began to tackle the enormous issue by providing veterinary care, and spaying and neutering as many animals as their limited resources allowed.

However, in 2004, Gill and John were struck by two tragic, life-changing occurrences. Whilst trying to rescue a tranquillised dog, Gill ran into a flooded field and contracted a rare form of septicaemia. The doctors didn’t think she would survive. But they didn’t know Gill and her determination. Although she sadly lost both lower legs, she fought and survived.

Only three weeks later, on 26 December 2004, the devastating Indian Ocean tsunami struck across Asia, including in Phuket. Thousands lost their lives, and many already-vulnerable animals were left in an even more desperate state.
But even when faced with such extraordinary setbacks and challenges, ones many people would not recover from, Gill never gave up. She always put the needs of dogs and cats before her own. And with herself and John at the helm of Soi Dog, and with people like you by their side, the organisation went from strength to strength in the years that followed.

Whilst enormous strides have been made to date, and countless animal lives have been saved, all of Gill’s dreams are not yet realised. There are still millions of desperate animals in Asia who need help.

To me, Gill was the embodiment of courage and sheer determination. Nothing was going to stop her doing everything she could for vulnerable animals. We could all take a page from her book. If there were more people like her in this world, I believe every animal would live in a safe and loving home, free from suffering.

Gill’s legacy lives on within Soi Dog, and because of people like you, every day we truly do take one step further towards Gill’s dreams becoming a reality. Please help us to keep Gill’s legacy going strong by making a donation in her memory to Soi Dog Foundation.

If you would like to join us in remembering and celebrating Gill’s life, we welcome you to respond to this email with a message for John Dalley, our co-founder and the husband of Gill. The messages will be passed on to John within the next few days. We will also select a few messages to post on our website. Unfortunately, due to our limited resources, we will not be able to respond to every message.

I am sure Gill would be proud to know that because of supporters like you, Soi Dog is helping more dogs and cats than any other animal welfare organisation in the world.

I hope her story inspires you as it does me, every day.