Imagine having a voice after years of being si­lenced. Imagine hundreds of audience members clapping and cheering you on when people have only ever treated you as though you were invis­ible. Imagine having the freedom to be whatever you please after an age of being defined by every­one around you. 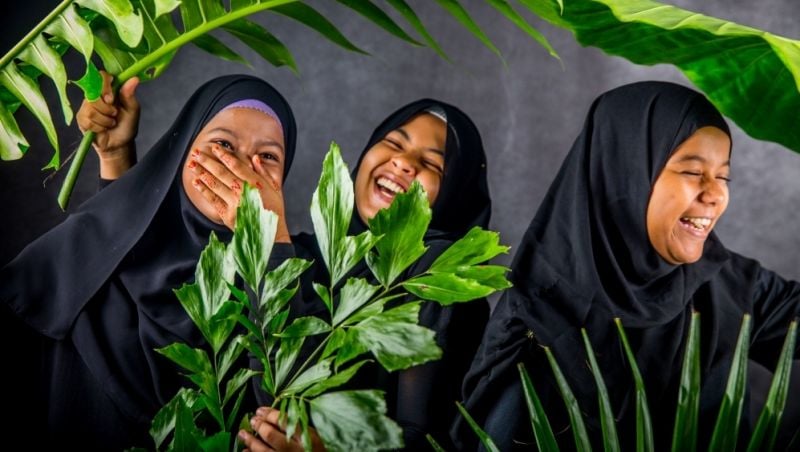 The PPLC is in dire need of funds. Photo: School of The Arts USM

That’s how a community of 8- to 14-year-old Rohingya refugees from the Penang Peace Learn­ing Centre (PPLC) felt last week after they took to the stage to perform Jungle Book The Musical at the Universiti Sains Malaysia’s (USM) Dewan Budaya Auditorium. And let me tell you: those voices were loud and clear, the audience was alive with laughter and applause, and there were no refugees on stage, only chattering monkeys, playful elephants and a pack of howling wolves.

The performances on September 5-7 raised vital funds for the PPLC, a UNHCR-registered school in the east of Penang island where 40 Rohingya children receive basic education in Malaysian Bahasa, English, mathematics, science and the arts.

The centre was founded in 2013 and survives on donations and the hard work of its handful of volunteer teachers. It oper­ates from a modest six-room house that’s in dire need of restoration and necessities, such as uniforms, books, stationery and teaching materials. Sadly, the centre also faces the constant threat of eviction as it struggles to pay the B37,000 rent each month.

The importance of the PPLC cannot be underesti­mated. Malaysia has no legal, policy or administra­tive framework for refugees, and Rohingyas are made to feel almost as ostracised there as they did in their native Myanmar where they faced systematic discrimi­nation, statelessness and violence. While Rohingyas are permitted to stay in Malaysia temporarily pending resettlement to another country, they are unable to ac­cess mainstream education, employment or healthcare, placing them in a state of limbo.

Fortunately, Head of the Music Department at the School of the Arts USM, and Jungle Book The Musical Project Director, Dr Pravina Manoharan recognised this and decided to channel money from a short-term university grant into the PPLC. Her aim? To empower these marginalised children through art and culture whilst also raising awareness of their plight among the Malaysian public and generating funds for the PPLC.

A take on Rudyard Kipling’s timeless and beloved classic The Jungle Book seemed like a fitting choice. The story, which sees Mowgli, a “man-cub” in an animal-dominated jungle, embark on a quest to un­derstand his identity and be accepted, mirrors the children’s experience without forcing them to relive the trauma of it.

Mowgli’s displacement, the friendships he fosters with Baloo and Bagheera, and Shere Khan’s determination to drive him from the jungle all play their roles in framing the story of the Rohingya child, explains Dr Pravina. Myanmar, Malaysia and in some cases Bangladesh have all been that hostile foreign “jungle” for these children.

The original script and soundtrack, including a song penned by three Rohingya boys in Arakan, their moth­er tongue, narrating their perilous journey to Malaysia by boat, allowed the children to own their story and tell it how they wished it to be told. Goosebumps all round.

To see these children sing, jive, swing and stomp across the stage is particularly moving given how ethnic Rohingyan music and dance have long been sup­pressed by the Myanmar regime. Self expression was almost alien to them, and so a multitalented creative team, including Director Izzard Padzil, Assistant Di­rector and Choreographer Nur Hilyati bt Abdul Ramli and Music Director Associate Prof. Razif Mohd, were on hand to guide the children in the basics of rhythm and melody, breaking songs and sequences down so they were manageable and memorable for them.

The script also stretched the children’s English skills. When the project launched 18 months ago, the majority had minimal knowledge of the language and many were unable to read. Lines were therefore learnt by mirroring mouth shapes and mimicking sounds, a slow but ultimately worthwhile process.

As the children grew in confidence, their pronunciation and understanding of English words and phrases gave the USM students and local Malaysian children, who they performed alongside, a run for their money.

As well as instilling language skills, the project also boosted the children’s self-esteem and helped them gradually overcome the social anxiety that so often ac­companies persecuted communities, but most of all, it allowed these children to just be, well, children.

So the next time you step off the minivan on your Penang visa run, after a 10-hour journey at the hands of a crazy driver on crazier roads, it’s worth remember­ing that not far away there’s someone who’s had an even more arduous journey there than you. And per­haps you can spare some time or money for the centre that works so hard to support them.

For more information about the Penang Peace Learning Centre, visit www.facebook.com/penangpeacelearning­centre.To make a donation, email officialpplcentre@gmail.com or message them through Facebook.