PHUKET: Rawai Mayor Aroon Solos will ban people from walking their dogs along Nai Harn Beach, enforced by a fine of up to B2,000 for whoever violates the ban.

animalsSafetytourism
By The Phuket News 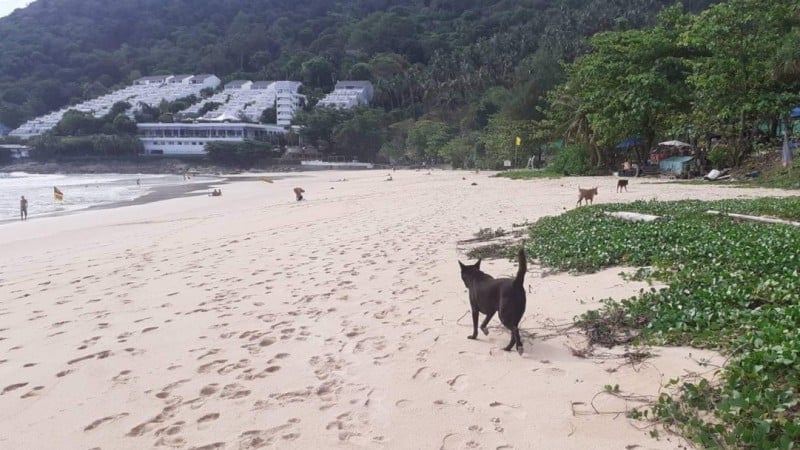 People will be banned from bringing their own dogs onto Nai Harn Beach, but the strays will stay. Photo: Phuket Lifeguard Service

The move follows a report that one visitor to the beach was set upon by two dogs that another visitor had brought to the beach, but allowed the dogs to roam free.

“We will post signs to explain that dogs are not allowed to be brought onto the beach. They will not be allowed on the sand, but they will be allowed on the grass area near the beach from 7am to 7pm every day,” Mayor Aroon told The Phuket News.

“The sign will also show that whoever violates the rule will be fined up to B2,000,” he added.

“We [Rawai Municipality officials] will discuss this rule and the fine together this week,” Mayor Aroon added.

Mayor Aroon added that the number of stray dogs at the beach was also a concern.

However, he added that he had never received a report that anyone at the beach had been attacked by the stray dogs there.

“I have been informed that many stray dogs are in the area, and some of these dogs have scared some visitors at the beach, but I have not heard of anyone being bitten or attacked by these dogs. I think they are not aggressive and have not tried to bite anyone,” he said.

“If a dog does attack any visitor, I will send officers there to have the dog removed,” he added.

Mayor Aroon noted that many of the stray dogs at the beach tend to be well cared for.

“Some people take food to give to them at the beach, while others give them food at the temple [nearby]. The dogs do not get food from trash at the beach, as the trash is cleared from Nai Harn beach every day,” he said.