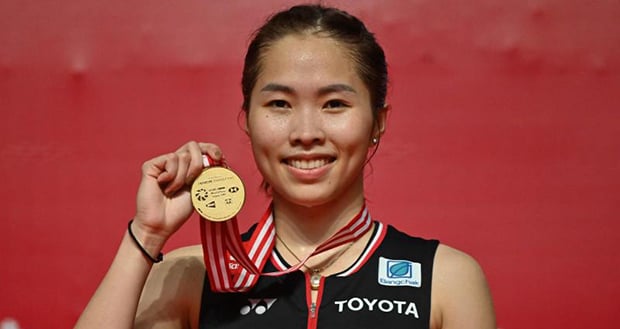 Ratchanok Intanon poses with her gold medal after defeating Carolina Marin of Spain in the women's singles final match at the Indonesia Masters tournament in Jakarta yesterday (Jan 19). Photo: AFP

Fourth seed Ratchanok denied Marin from completing a victorious comeback at the BWF World Tour Super 500 event a year after the Spaniard's horrific injury during the final against Saina Nehwal of India.

“Carolina Marin is very strong mentally, at important points she gets aggressive. I tried to be myself and tried to enjoy the game. Every player will have pressure, so I had to control myself,” said Ratchanok after the 80-minute final.

The Thai ace said she had tried to stay quick at the last stages.

“On my last changeover, I felt like there was wind behind her, so she would attack, and I couldn't be slower than her, I had to run every ball down, and do my best, win or lose.”

Marin's determination in capturing the title had been evident all week, for it was here in last year’s final that she suffered an ACL injury that kept her out of the game for several months. The conclusion to the fairytale comeback wasn't perfect, but Marin herself wasn't too disappointed.

“I don't know if I can feel happy or sad, or be frustrated with myself, because I could not win here, it was one of my goals when I had the injury last year when I talked to my coach,” the Spaniard said.

“It's OK, I just reached the final, I need to learn about that. I think Ratchanok played so well, she was cleverer than me on the net. But well, sometimes it happens, we have to analyse what happened today.”

Last year, Antonsen won his first career title after knocking out Japanese world No.1 Kento Momota, who skipped this year’s tournament after being injured in a car accident that killed his driver.

The top-ranked pair suffered a surprise loss in the quarter-finals at the Malaysia Masters last week.

In the women’s doubles final, Greysia Polii and Apriyani Rahayu battled back from a game down to defeat Maiken Fruergaard and Sara Thygesen of Denmark 18-21, 21-11, 23-21 to capture the gold medal.

The world champions also beat Wang and Huang in the Kuala Lumpur final a week ago.