PHUKET: Officials at Phuket International Airport have launched a campaign to conduct random drug testing on taxi drivers at the key tourism facility in the hope of having the airport declared a “White Airport” and boost confidence among tourists that they are getting a “clean” driver.

tourismtransportdrugsSafety
By The Phuket News 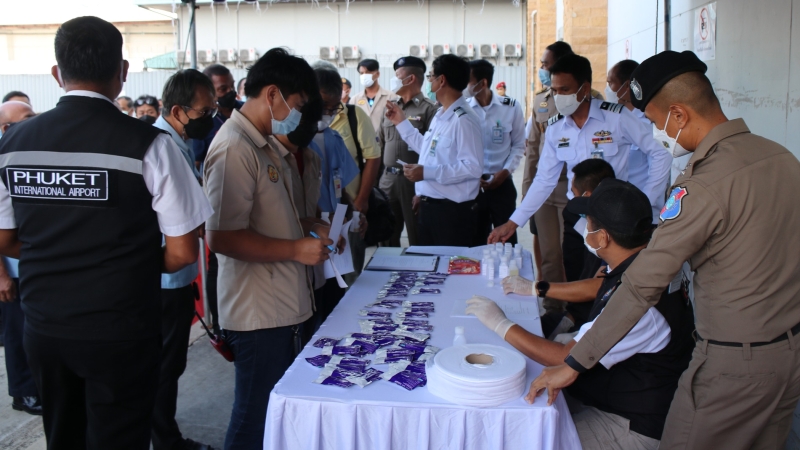 Drivers gathered at the parking lot for international buses at the airport yesterday (July 18) for their tests.

Monchai Tanode, General Manager of Phuket International Airport, presided over the opening ceremony of the campaign, which he explained was a collaboration between Airports of Thailand (AoT) management at Phuket Airport with Tourist Police, Sakhu Police and the Phuket Provincial Transport Office.

“The campaign is to ensure the safety of tourists using taxis and buses at Phuket Airport,” he said.

Under the campaign, AoT Phuket staff will conduct random urine tests on drivers at the airport. Drivers who test negative will receive a star sticker marked “White Airport”.

The sticker will also specify the license plate number of the vehicle and the driver’s name to deter divers who had not tested negative from trying to cheat the system, Mr Monchai said.

However, it was not clarified exactly which drugs the drivers are tested for, or what happens to any drivers who test positive for drug use.

“In addition to creating safety and confidence in using a taxi service, the campaign is also to prevent and deter people from exploiting tourists or visitors at Phuket Airport,” Mr Monchai said.

Mr Monchai said passenger throughput at the airport was only about 30% of pre-pandemic levels, but noted that was an improvement.

“Since the government canceled the Thailand Pass system, the number of tourists has increased by about 40-45%. The total is about 20,000 people per day, comprising about 12,000 domestic passengers and 8,000 international passengers per day,” he said.

The largest group of inbound visitors was “probably” those arriving from the Middle East, Mr Monchai said.

“There are now approximately 90-100 domestic flights per day, both inbound and outbound. As for international flights, there are about 60 daily flights a day,” Mr Monchai said.

However, Mr Monchai noted, “There are still airlines from India requesting to add more flights to Phuket.”

“It is expected that from now on the tourism situation will improve accordingly, especially during the high season to come [at the end of the year],” Mr Monchai said.

“It is predicted that there will be 70-80% of tourists coming in compared to the number of tourists who had arrived in Phuket before the COVID-19 pandemic,” he concluded.