PHUKET: The temporary pump station built beside Wanit lake is complete and ready to provide up to around 2,400 cubic metres of water per day to hard-hit households in Koh Kaew and Rassada in a last-ditch effort to restore water supply as the annual rains return. 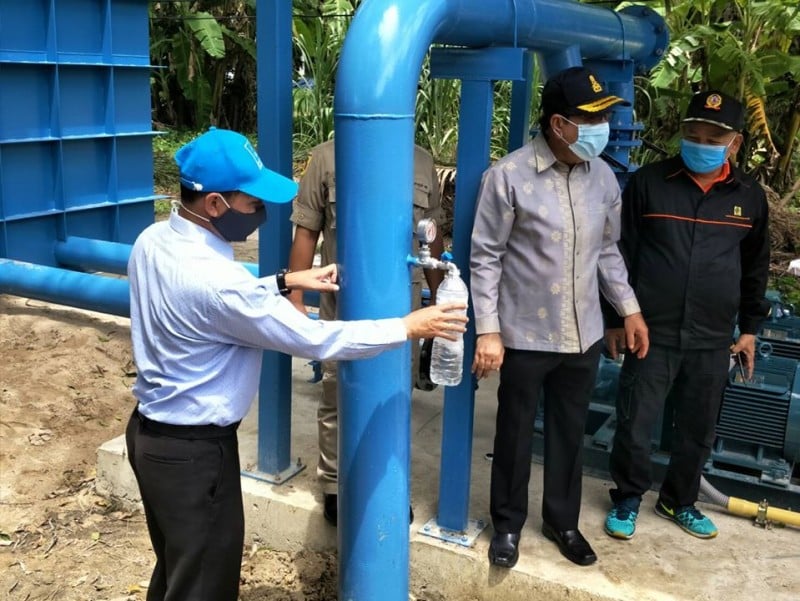 The lack of rain on the island since last year has seen water levels at Bang Wad and Bang Neow Dum reservoirs plunge to the point that the volume of water needed could not be drawn from them, leaving many people suffering without running water supply, V/Gov Wongsakorn explained.

“The water levels in the reservoirs are too low to be used to be distributed to people’s houses,” he said.

The provincial government recognised the problem of Phuket running out of public water supply as early as October last year, when a battle plan for countering the problem was set out in a meeting with the Secretary-General of the Office of the National Water Resources (ONWR), V/Gov Wongsakorn noted.

“When we met in October last year, the plan was to first use water from canals, second from private water sources, and then use what water was left in the PWA sources as a last resort,” he said.

“If we used only the water in the PWA’s sources, we would not have been able to make it through this [past] dry season,” he said plainly.

“We have already pumped water from Klong Bangyai [to supplement the mains water network], but it ran dry, so we moved to the second part of the plan. We pumped water from many private water sources, such as sources in Bangjo, but they all dried up too,” V/Gov Wongsakorn explained.

“The last group of water sources we contacted are the owners of the lake at Boat Plaza, the lake in front of Wat Manik, and Wanit lake,” he said.

The cost of installing the equipment necessary to have water from Wanit lake to the water-production [part-purification] station at Bangjo was prohibitive, V/Gov Wongsakorn said.

“So we rented a mobile water-production machine to operate beside the lake. That needed a much smaller budget,” he explained.

“Wanit lake will be the last private water source we will use, as we have now had more rain, which is increasing the water level in the canals and reservoirs,” he added.

V/Gov Wongsakorn said that although many people had been left without running water supply, they had not been left high and dry.

“Relevant officers together helped people by sending water trucks to the end of water pipe areas [where no running water was being supplied], especially in Rassada where there are more than 10,000 households,” he said.

“People in some houses in the area are now starting to have running water to use, but there are still people suffering without water supply.

“Now the water pressure serving Rassada will increase over the next two weeks, and every household will have water to use,” V/Gov Wongsakorn assured.