Procession for the ages

Procession for the ages

The royal barge procession, marking the conclusion of the royal coronation ceremony, is fast approaching, having been rescheduled from Octo­ber 24 to December 12 due to water levels and currents in the Chao Phraya River, and weather conditions. Rehearsals have been underway for months to ensure everything runs smoothly on the day. Photo: TAT 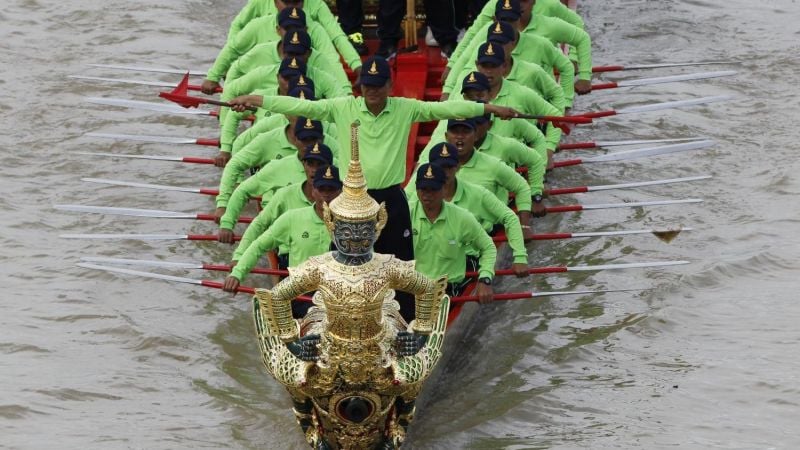 Oarsmen are given instructions on how to engage in rhythmic paddling aboard an escort barge during a rehearsal. Photo: Bangkok Post

But what does this auspicious event symbolise, and what can spectators expect?

The procession, scheduled for Thursday, December 12 at 3:30pm, will see His Majesty King Maha Vajira­longkorn Bodindradebayavarangkun, accompanied by Queen Suthida Ba­jrasudhabimalalakshana, travel along the Chao Phraya River in Bangkok in a flotilla of 52 ceremonial barges and boats, including four royal barges: the Suphannahong, or golden swan; the Anantanakkharat, or multi-headed naga; the Anekkachatphutchong, or in­numerable naga figures; and the Narai Song Suban King Rama IX.

The procession will begin at Wasukri Pier and end at the Ratch­aworadit Pier, a journey covering approximately 3.4 kilometres that will take around 45 minutes.

Rehearsals have been underway for months to ensure everything runs smoothly on the day. The rescheduling necessitated adding five more rehears­als: on November 12, 19 and 26, with the final rehearsal taking place on De­cember 9.

About 2,200 oarsmen have been prepared to row the barges that are ar­ranged into five groupings. Rhythmic barge-rowing songs are part of this cer­emonial water-borne procession, which is a rare spectacle, arranged on special occasions only.

Six temples on both sides of the Chao Phraya River will hold a Buddhist chanting ceremony in honour of Their Majesties; each will begin the chanting ceremony when the royal barge is approaching the waterfront of the temple and conclude when the procession has passed the temple. Various sites will be set up along the river for specta­tors. The event will also be televised for viewers in 177 countries worldwide.

The public is invited to wear yellow shirts to offer good wishes and show their loyalty to Their Majesties.

The royal barge procession can be traced back to the Ayutthaya period more than 300 years ago. A piece of literature known as lilit phayuha yattra phetphuang, penned by Chao Phraya Phrakang Hon in 1887 during the reign of King Chulalongkorn of the Rattanakosin period, mentioned the launch of the phetphuang royal barge procession, modelled on a similar ceremony in the Ayutthaya period, joined by boats whose masthead figures were elaborately carved into mythical animals.

In the past, other processions by boats served either royal functions or river festivals enjoyed by ordinary people. In peacetime, men were called to take up positions on the barges and boats in an exercise to prepare them for armed conflicts with rival kingdoms. '

The processions also provided a means of transport for the monarch during important occasions, such as the coronation, the relocation of principal Buddha images from the provinces to Bangkok and the reception of foreign envoys.

The tradition was revived by the late King Bhumibol Adulyadej in 1960 after a lapse of several decades and takes place at the end of Buddhist Lent, with robes presented to Buddhist monks as part of the event.

Royal processions, both by land and by water, exhibit the glory and great power of the monarch, in accordance with the traditional beliefs and court traditions handed down through generations. This procession also marks the conclusion of the royal coronation ceremony, one of the most important events for all Thai kings.

This article combines information from the Tourism Authority of Thailand and the Bangkok Post.