PHUKET: The privately built road Patong Hill from opposite Patong Go Kart on Phra Baramee Rd in Kathu to the Chao Por Seua Temple (“Tiger Temple”) at the top of hill opened to motorbikes and small vehicles only today (Nov 29). 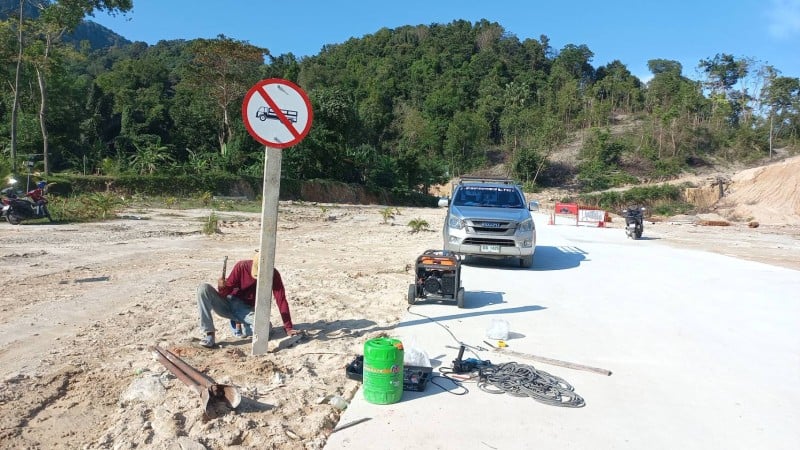 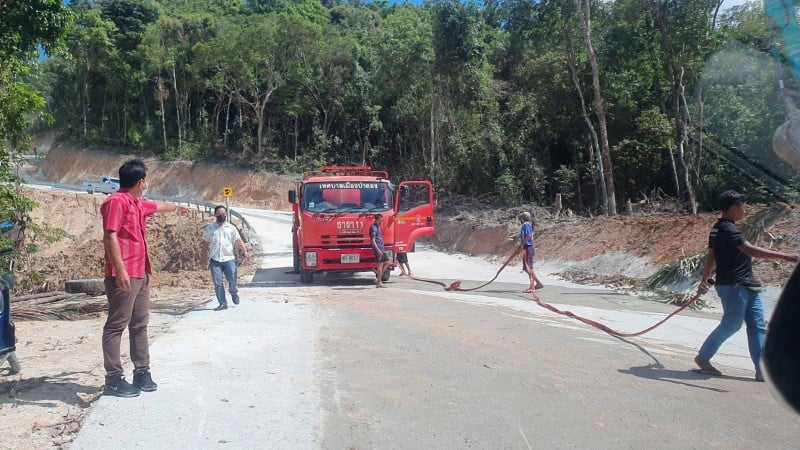 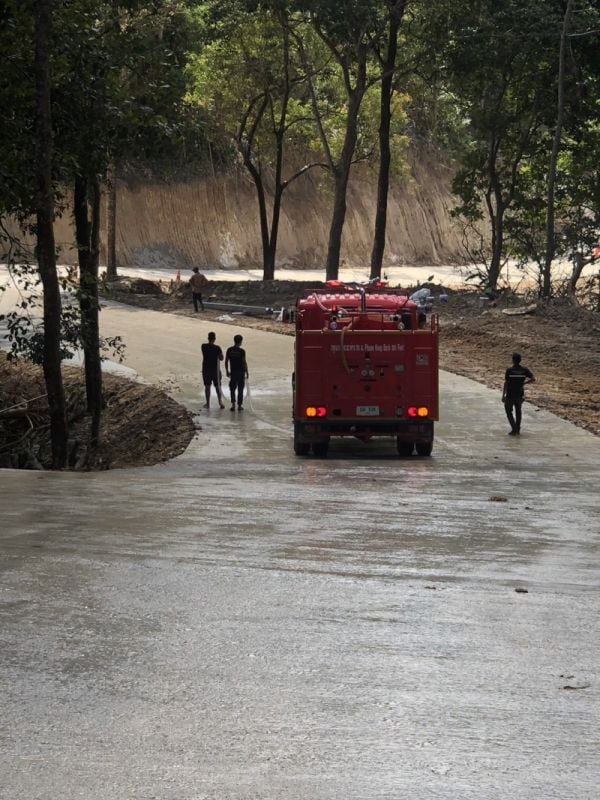 The road opened to traffic as part of the “test phase” ahead of the road’s grand opening, scheduled to be held next Monday (Dec 5).

Preechawude ‘Prab’ Keesin, head of the Pisona Group of companies in Patong and Founder of the Patong Development Foundation, which is overseeing construction of the private road, announced the news to The Phuket News’ Thai-language sister newspaper Khao Phuket.

“We are currently in a testing phase. At the same time, we are still installing the last of the guardrails along the side of the road. We have 320 metres to go,” Mr Preechawude confirmed.

The road, which extends some three kilometres long, is expected to officially open next Monday (Dec 5), Mr Preechawude added.

The road opened to restricted traffic early this afternoon after cleanup crews hosed dirt and other debris off the newly laid concrete road.

“Only motorbikes and “small vehicles”, namely cars, pickup trucks and passenger vans ‒ are allowed to use the road,” Mr Preechawude said.

Construction of the road is aimed at alleviating traffic on other roads leading to and from Patong, Mr Preechawude explained.

Currently on the old main road over Patong Hill (Phra Baramee Rd, Route 4029), only motorbikes are allowed westward up the hill, from Kathu to Patong.

The  restriction is for safety while work continues on reinforcing the embankment at the site of the landslide that damaged the road over the hill.

Motorbikes and “small vehicles”, namely cars, pickup trucks and passenger vans, are allowed down the hill from Patong to Kathu.

The new road is an initiative of local business owners in Patong, with the project coordinated via the Patong Development Foundation. The road crosses private land donated to allow the road to be built, and is entirely privately funded.

According to the call by Patong Development Foundation for donations to help fund building the road, asking for all people across Phuket to donate just B30 each, the road is estimated to cost some B12.4 million. At last report donations of just over B2mn had been received.

At last report, heavy rains last week had slowed progress on the repairs to the road over Patong Hill. The road was initially hoped to be open to traffic in both directions by mid-December.

Officials reported this morning (Nov 29) that the contractor for the repairs to the Patong Hill landslide site had delivered more than 100 truck loads of dirt that has been compacted into the embankment that supports the damaged road above.

The dirt has been compacted in tiers that have had an array of pipes installed at each level to help drain excess water from the soil that forms the embankment, officials noted.

Meanwhile, officials are continuing to report “good progress” being made in the construction of the new road over the hills from Chalong to Patong.

The “good progress” has not been clarified in terms of completion. At last report, on Nov 12, Phuket Provincial Administrative Organisation (PPAO) President Rewat Areerob) inspected progress of the road under construction, from behind the Klong Kata reservoir in Chalong to 50 Pi Rd in Patong.

The project was “approximately 73% complete”, he said at the time.

No estimated date for completion has been revealed to the public since the PPAO elected to move ahead with plans to make the road “permanent”.

The road was initially to be “temporary only”, and open to vehicles to use after only “two weeks”, Mr Rewat said in announcing the work on the new road on Oct 24