HONG KONG: Hong Kong police shot and wounded a pro-democracy protester on Tuesday during the city’s worst unrest of the year, hours after China celebrated 70 years of Communist Party rule with a massive military parade. A Hong Kong firefighter fights a blaze at the entrance to the Admiralty MTR subway train station in Hong Kong, during running battles between police and pro-democracy protesters. Photo: AFP 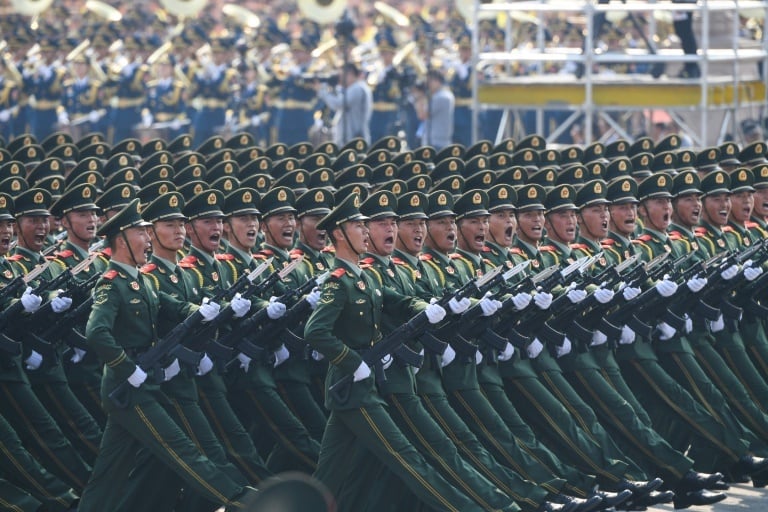 Thousands of troops marched through the square in tight formation. Photo: AFP It was the first such shooting in nearly four months of increasingly violent protests and threatened to strip the spotlight from China's carefully choreographed birthday party, designed to underscore its status as a global superpower.

While President Xi Jinping took salutes from about 15,000 troops in the capital, pro-democracy protesters in semi-autonomous Hong Kong threw eggs at his portrait, with tens of thousands of people defying police orders to disperse.

Hundreds of Hong Kongers staged a sit-in on Wednesday outside the school of the protester who was shot as authorities said the wounded 18-year-old was now in a stable condition.

The international finance hub has been left reeling from the shooting, the first time a demonstrator has been struck with a live round in nearly four months of increasingly violent pro-democracy protests.

Hong Kong stocks fell in the first few minutes of trade on Wednesday, following steep losses on Wall Street and the fresh violent demonstrations in the city.

Hong Kong was battered by the most sustained political clashes of the year on Tuesday as China celebrated 70 years of Communist Party rule with a massive military parade in Beijing.

The spiralling violence underscored seething public anger against Beijing's rule and shifted the spotlight from China's carefully choreographed birthday party, which was designed to showcase its status as a global superpower.

Running battles raged for hours across multiple locations as hardcore protesters hurled rocks and petrol bombs. Police responded for the most part with tear gas, rubber bullets and water cannon.

In Tsuen Wan district, a police officer fired his weapon at close range into the chest of Tsang Chi-kin, 18, as his unit was attacked by protesters armed with poles and umbrellas.

Police said the officer feared for his life on a day that saw his colleagues fire five warning shots from their pistols throughout the city.

“In this very short span of time, he made a decision and shot the assailant,” police chief Stephen Lo said.

But protest groups said the officer charged into the melee with his firearm drawn and condemned the increasing use of live rounds.

From critical to stable

The shooting was captured on video that quickly went viral.

Outside Tsang’s school on Monday students chanted slogans and held pictures of the incident, taken form videos posted on Facebook.

“No rioters, only tyranny,” they chanted, alongside other popular protest slogans.

Tsang, who was filmed trying to strike the officer with a pole as he was shot, was taken to a nearby hospital in a critical condition but authorities said his condition has since improved.

“According to the latest information of the Hospital Authority, the current condition of the man is stable,” the government said in a statement.

A friend and classmate of Tsang, who gave his first name Marco, said the 18-year-old was a keen basketballer who was infuriated by sliding freedoms in Hong Kong and the police response to the protests.

“If he sees any problems or anything unjust, he would face it bravely, speak up against it, instead of bearing it silently,” Marco told AFP.

Police said 25 officers were injured in the National Day clashes, including some who suffered chemical burns from a corrosive liquid that was thrown at them by protesters. The liquid also wounded some journalists.

Hospital authorities said more than 70 people were admitted on Tuesday. Police made some 160 arrests throughout the day.

Hong Kong is seething with anger over Beijing’s rule and many of the fights were especially fierce, even by the standards of this summer’s violence which has raged for 17 consecutive weeks.

In one clash several police and reporters were wounded by corrosive liquid thrown by protesters.

Burning barricades sent a pall of black smoke over the city, a regional hub for some of the world's biggest banks.

Hong Kong’s protests were ignited by a now-scrapped plan to allow extraditions to the mainland.

But after Beijing and local leaders took a hardline they snowballed into a wider movement calling for democratic freedoms and police accountability.

Sentiment is hardening on all sides.

The protest movement’s main demands are an independent inquiry into police actions, an amnesty for those arrested and universal suffrage.

But Beijing and Lam have said they are unwilling to meet those demands.

Former colonial ruler Britain, which handed Hong Kong back to China in 1997, decried the use of live ammunition as “disproportionate”. Foreign Secretary Dominic Raab said that “it only risks inflaming the situation”.

The violence cast a shadow over the lavish parade in Beijing where tanks, new nuclear missiles and a supersonic drone paraded. Xi and other top officials – including Hong Kong chief executive Carrie Lam – watched from a rostrum overlooking Tiananmen Square.

The event was meant to showcase China's journey from a poor nation broken by war to the world’s second largest economy.

Xi, who wore the distinctive “Mao suit”, delivered a speech invoking the “Chinese dream” of national rejuvenation – a his grand vision of restoring the country to perceived past glory.

“There is no force that can shake the foundation of this great nation,” Xi said from the Tiananmen rostrum where Chairman Mao Zedong proclaimed the People's Republic of China on October 1, 1949.

Helicopters flew in a “70” formation as troops goosestepped across Tiananmen Square in what state media described as the country’s biggest military parade, featuring 580 pieces of armament and 160 aircraft.

The People’s Liberation Army brought out its newest hardware, including a nuclear-capable intercontinental ballistic missile with range enough to reach the entire United States, and a launcher for a hypersonic glider.

Warplanes including the J-20 stealth fighter soared through the smog-choked skies, and state media said a high-altitude, high-speed reconnaissance drone made a public appearance for the first time.

“The party hopes that this occasion will add to its legitimacy and rally support at a time of internal and external challenges,” Adam Ni, a China researcher at Macquarie University in Sydney, told AFP.

But the unrest in Hong Kong also illustrated the challenges faced by China, which is also contending with US trade war negotiations.

Despite increasing violence there is still widespread public support for a movement that presents the most serious threat to Beijing’s rule since the handover.

In his speech, Xi said China “must adhere” to the one country, two systems policy governing Hong Kong and “maintain the long-term prosperity and stability” of the city.

A giant portrait of Mao, followed by those of past leaders and Xi, streamed across the avenue as the president and other officials waved.

Replicas of a space rocket, a homegrown passenger plane and high-speed trains were followed by smiling ethnic minorities – imagery that glosses over accusations of human rights abuses in the frontier regions of Tibet and Xinjiang.

The Communist Party has repeatedly defied the odds to remain in power for seven decades.

Under Mao, tens of millions of people died during the disastrous Great Leap Forward, and the country was plunged into violent chaos during the decade-long Cultural Revolution.

After Mao’s death in 1976, the party launched the reform and opening-up policy under paramount leader Deng Xiaoping, starting decades of breakneck growth and development.

But the party retained a stranglehold on power, sending troops to end the biggest challenge to its rule in 1989 when pro-democracy protesters occupied Tiananmen Square.