The pickup truck was seen on CCTV being used to steal the Honda PCX motorbike. Photo: Eakkapop Thongtub 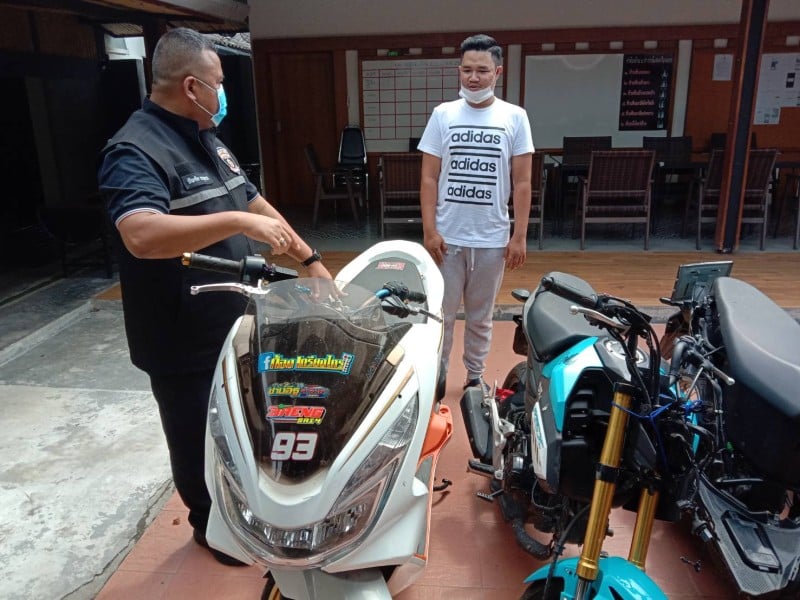 The Honda PCX motorbike was recovered in the raid. Photo: Eakkapop Thongtub Maj Eakkarat Chartphai of the Phuket Provincial Police and other officers moved in and arrested Anek Thachumpha, originally from Lopburi, at a house in Moo 3, Rassada, early Thursday morning (Aug 13).

In the back of a Toyota Mighty X pickup truck parked front of the house was a Honda PCX motorbike covered with a tarpaulin.

The Honda PCX motorbike had been reported stolen by Kriangkrai Yaodam, 23, originally from Trang, on Wednesday morning, Maj Eakkarat explained.

Mr Kriangkrai had called police just after 7am after he found that his motorbike had been stolen from the parking area at the apartment building where he stayed, also located in Moo 3, Rassada.

Police checked CCTV footage in the area and confirmed that Kriangkrai’s motorbike was stolen by being loaded into the Toyota Mighty X pickup truck and taken to Anek’s house.

Anek told police that he had been given the motorbike from Phuket native Rawat ‘Lek’ Makkhong, a customer at his motorbike repair shop.

The deal was for Anek to hold onto the motorbike as collateral for a loan to Rawat of B5,000, Anek said.

Police are still looking for Rawat and checking whether the seven other motorbikes were also stolen.