PHUKET: Police are searching for a man who assaulted and hospitalised a 53-year-old man in Tambon Talad Yai, Phuket Town yesterday evening (Mar 19). 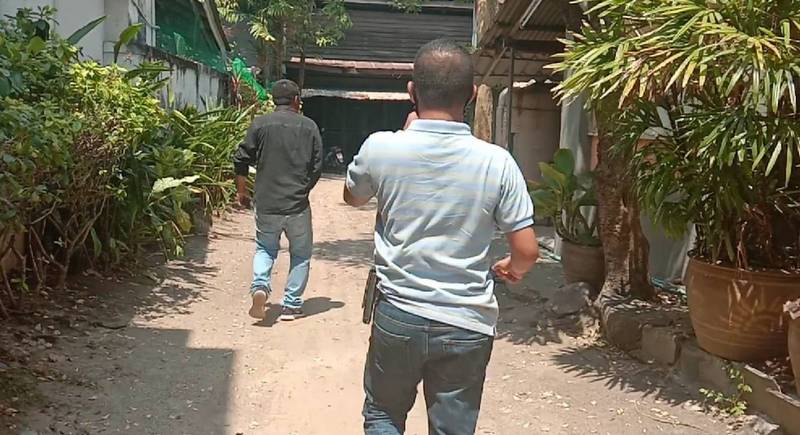 Police at the entrance to the Soi where the attack took place last night. Photo: Eakkapop Thongtub.

The incident occurred at the entrance of a small street off Takua Pa Rd nearby the home of 53-year-old Mr Anan Chuenkaew who was beaten with a piece of wood by his assailant who then fled the scene by stealing Mr Anan’s motorbike.

Lt Col Sakchai Chunyong of the Phuket City Police was called to the scene at about 6:35pm along with Kusoldharm rescue workers where they found Mr Anan lying face down unconscious on the road with a bleeding wound to the back of his head.

Nearby lay the piece of wood, approximately 80cm long, that is believed to be the assault weapon.

According to witness reports the attacker is a male estimated to be around 20-30 years of age. He struck Mr Anan with the wood resulting in Mr Anan falling to the ground. The assailant then took Mr Anan’s black-white Honda Click motorbike and fled the scene onto Taling Chan Rd.

Mr Anan’s neighbour, who only wanted to be named as “Ms Noi”, told The Phuket News that Mr Anan is a quiet and friendly man who salvages junk and discarded items which he sells to recycling companies for money.

“I have never seen him arguing with anyone,” she said.

“Yesterday I saw him leaving his home on his motorbike, but he was then stopped and assaulted by a man at the entrance of the Soi we are living in,” Ms Noi added.

Phuket City Police Chief Col Theerawat Liamsuwan confirmed that Mr Anan is alive and his condition has improved although he remains under medical expert watch.

Col Theerawat stated that nearby CCTV cameras confirmed the witness accounts of the attack and that from initial investigations it is believed the attacker lives in Wichit.

“We are confident we will arrest him soon,” Col Theerawat concluded.

The reasons behind the attack are not yet known but investigations continue.